Home » Huge crowds descend on Buriram for historic race; it should be a scorche 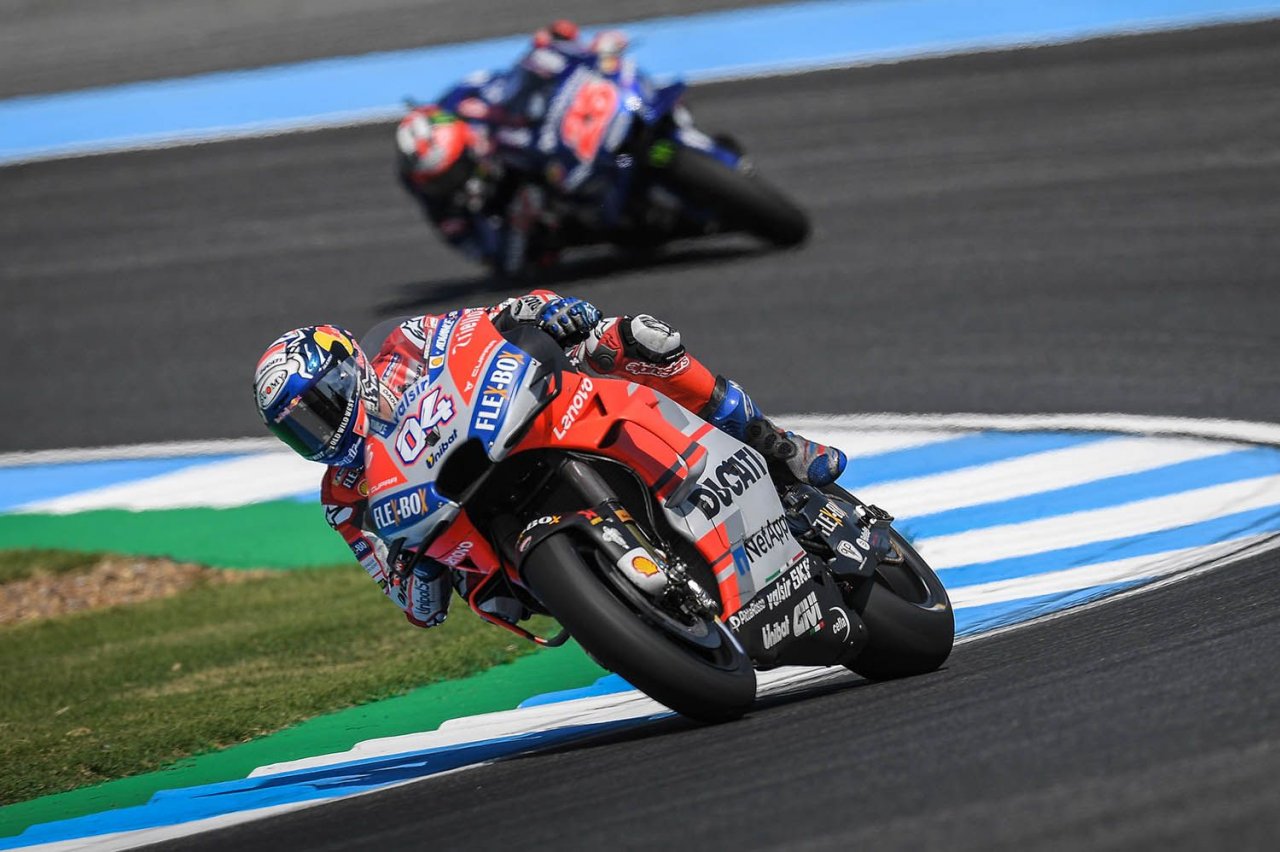 Buri Ram – The cream of the motorcycling world are at the Chang International Circuit this weekend to test not only their speed but also their endurance under the scorching Isaan heat for the Kingdom’s first ever MotoGP.

Reigning world champion Marc Marquez of Honda, Ducati’s Andrea Dovizioso, who is chasing the Spaniard in the Championship race with 174 against 246 points, and seven-time world champion Valentino Rossi of Yamaha have their eyes firmly fixed on wining the inaugural MotoGP Thailand, the 15th stop on the MotoGP calendar year.

Even as the first practice sessions got underway the riders soon realised that the country’s signature unkind heat would significantly affect their results over the next couple of days.

“The heat is high, maybe even more than Malaysia and it’s very hard for everyone. The bike is very hot, that will affect the race,” bemoaned Dovizioso who has won at three circuits this season: Qatar, Czech Republic and San Marino.

In Friday practice, however, he produced the best time of 1:31.090 minutes in the combined timesheets, 0.031 faster than Maverick Vinales of Movistar Yamaha, while Cal Crutchlow of LCR Honda Castrol completed the top three split just 0.043 behind. Marquez was fourth with 1.31.188 minute.

“The weather is difficult because it’s very hot, and it can rain every day. So first we hope for a dry race,” said Rossi, who wasn’t a fan of the track here as he described it “not fantastic for M1.”

Jorge Lorenzo of Ducati suffered a huge crash during practice on Friday but was later declared fit to compete.

Four Thais will also be testing their mettle – not in the MotoGP, but in Moto2.

Nakarin, 22, from Khon Kaen, won two races at the track in 2015, the Asia Road Racing and Asia Talent Cup and said: “This will be a very important race for me. It will be one of the races that I feel most confident in as I have been training hard at home for weeks.

“I have spent a lot of time getting used to the circuit and the weather condition.”

Apiwath is thrilled to be awarded a wildcard into his first ever Moto3 but is determined to summon everything he has to please the home fans.

“ I’m well prepared and will give my all to achieve the best result. I will learn the engine, the circuit condition and the rivals to get best results this weekend ,” said the 2017 Asia Road Racing winner in 600cc.

“Despite many sectors are working hard in regards to preparation, people should be prepared for traffic problems and other difficulties such as long queues for services as hundred thousands of people are heading to Buriram,”  Tanaisiri said.

The circuit MD also suggested fans study the diagram of the event well and be equipped with necessary items including powerbank, umbrella, personal medicine as well as dress accordingly to the high humid condition.

Tanaisiri also asked Thais to welcome foreign visitors with warm hospitality and bikers to pay attention on road safety during the event.

“This is a great experience that all Thais we should share together. Accidents may lead to negative image of our hospitality. Precautions and patience are what we have to be concerned,” he added.

Seven injured in Bangkok as sleepy motorist ploughs into motorcyclists