THE world’s former fattest man was once so large that hospital staff planned to have him cremated in an ABATTOIR.

Paul, 61, from Ipswich, said of the plan, which was drawn up during his three years living on a hospital ward: “If I died in hospital they wouldn’t be able to deal with someone my size so they made a form up to say that if I died in hospital they’d have to take me to an abattoir to where the large animals go to and die…. And I’d be cremated in the animal cremation.

“I thought it was disgusting. I couldn’t believe they were doing that.”

But it’s not the only inhumane treatment that Paul – who at one point ballooned to 80 stone – had to endure.

In the ITV documentary he reveals how his diet of 40 chocolate bars a day led his teeth to crumble.

As leaving the house became increasingly difficult, Paul would pull out the cracked teeth himself with pliers.

The former postie said: “I used to heat needles up, sterilise my mouth, sterilise the needle and put it straight into the gum – kill a nerve.

“I used to get a pair of pliers, put wadding on the insides of them because I couldn’t bear the metal actually touching my bits of my teeth I had left.”

Paul believes he has removed a DOZEN of his own teeth this way.

There was a point where things were looking up for Ipswich’s Paul.

After a successful gastric bypass in 2015, he managed to shrink down to 19 stone.

Falling in love with Rebecca Mountain – an American 13 years his junior – he moved to the United States where he underwent a series of operations to have his excess skin cut off.

After a 2015 operation which removed several stones of loose skin, he described waking up feeling “light as a feather”.

His mobility improved and his love life with eight stone Rebecca was blooming.

She said back in 2013: “The physical side of our relationship is fabulous. We have a physical chemistry as strong as our emotional chemistry.”

Paul added: “Paul: It’s so intense. It’s just a touch and that really triggers feelings I’ve never had before.

“There’s certain things that will be natural in the future after my operations and that’s another chapter we can explore which makes it even more exciting.”

Rebecca eventually proposed to Paul live on American TV in 2014.

But while everything seemed to be going in the right direction for Paul, he was struggling mentally.

“At my lightest just after my surgeries I was 19 stone but my mind was not right, I weren’t that 19 stone person,” he said.

While he admitted he looked “thin” in the mirror, deep down he was “still that person carrying that excess skin”.

He said: “Your body, it takes time to adjust and your mind definitely – I was carrying that for so long, and struggled with all the issues around it all.”

As his mental health worsened, Paul’s eating began to increase.

“For me it was the crisps every night,” he admitted.

“Go to sleep for a couple of hours and wake up. It started when I was living with Rebecca, she could hear at night me rustling the old crisp packets you know.”

Paul falling back into his old ways put strain on their relationship – and they eventually split for over a loaf of BREAD.

They were both on the paleo diet, where you mimic what cavemen eat — veg and meat.

But Paul said: “I needed some bread, some butter and some cheese. She saw the bread and she went berserk.”

Rebecca,  who runs a cat furniture business, added: “You can’t have a relationship with somebody who is essentially pushing you away.”

The split set off a chain of events for Paul that saw him moving in with a woman he met on Facebook who, he claimed, was hooked on opioids.

In order to fund his food consumption Paul had started stealing from local stores. He was fined $50 during a US court appearance in November 2018.

But he couldn’t resist temptation and was caught with $1,000 worth of stolen goods the very next day.

Back in Blighty he has been seeing  specialist psychologist Dr Laura Williams, who is helping him to dig down to the source of his issues.

He believes many of his problems stem from his childhood and the verbal and physical abuse of his father, a military policeman.

Paul said: “Hewould hit me anywhere really, mostly round the head. The slightest little mistake he’d turn round and give me a wallop.”

His father also struggled with his weight, and when his mother once tried to serve him as salad, Paul recalls how he threw the plate across the table and shouted: “I don’t want this s***!”

“I never saw him actually hit her but him shouting at her was enough – bringing her to tears many a times,” he tells.

He was also sexually abused for three years from the age of six by a women known to the family.

Recalling the first instance, he said: “She was drunk, you know, stinking of alcohol and smoke and whatever.

“She told me: ‘You can’t say anything to your dad or mum or anyone about this because you know what your dad’s temper is like.’

“That made me more withdrawn in myself. Obviously I was scared to say anything.”

Paul hopes he can now finally conquer his demons, leaving him finally with a healthy mind and body.

Ten years ago I didn’t know where I was but now I do know what I want,” he said. 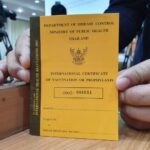