Dozens of Ladies and Lady-boys  have been arrested in Pattaya

Surachet held a press conference at 1.30am to announce the arrests. He said police also searched several spots and arrested 11 teenagers for abusing drugs and seized a small amount of crystal meth.  Source: Bangkok Jack 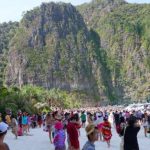 Maya Bay will be closed for three months next year.