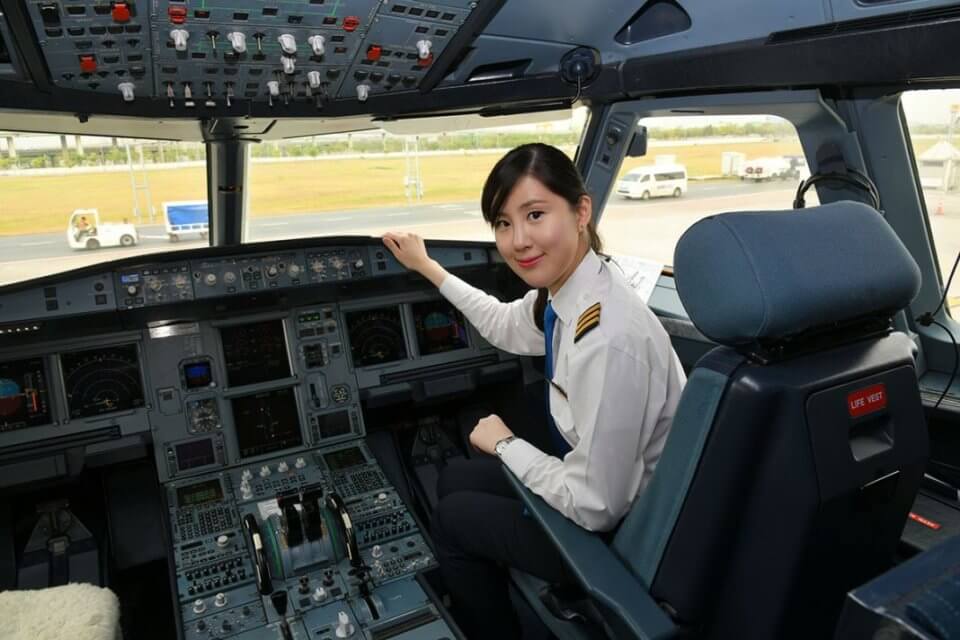 Each year, droves of Thai women over 160 centimeters in height wheel their suitcases toward a coveted dream job long considered a pinnacle of female achievement – becoming a flight attendant.

Few make it. Even rarer are those who succeed in aiming farther – a seat in the cockpit. One glance at national carrier Thai Airways’ job requirements suggests why. While flight attendants may be of any gender, the airline considers only men to be qualified.

Some passengers flying Bangkok Air are doubtless surprised then to be greeted over the intercom by 1st Officer Julie, a former air hostess who emerged from years of rigorous training to become a pilot, something she hopes is indicative of growing ranks of Thai women pilots.

“Good morning, ladies and gentlemen. This is your 1st Officer, Srimanee Tang, speaking on behalf of the captain…” the 29-year-old repeats in English, Thai and Mandarin, on flights throughout ASEAN.

Those Thai commercial airlines which accept female pilots count only about one-in-10 on their workforces, many of whom stuck the landing from beverage cart to flight stick.

Precise and mechanical in her movements, 1st Officer Srimanee “Julie” Tang speaks through a clipped smile as she strides confidently up the stairs into the plane, unphased by the harsh sun and wind bearing down on the tarmac.

In a narrow Airbus A320, the cabin is under four meters wide. The cockpit is even narrower, and that’s where Julie has squeezed herself into on a recent afternoon at Suvarnabhumi International Airport in Bangkok. 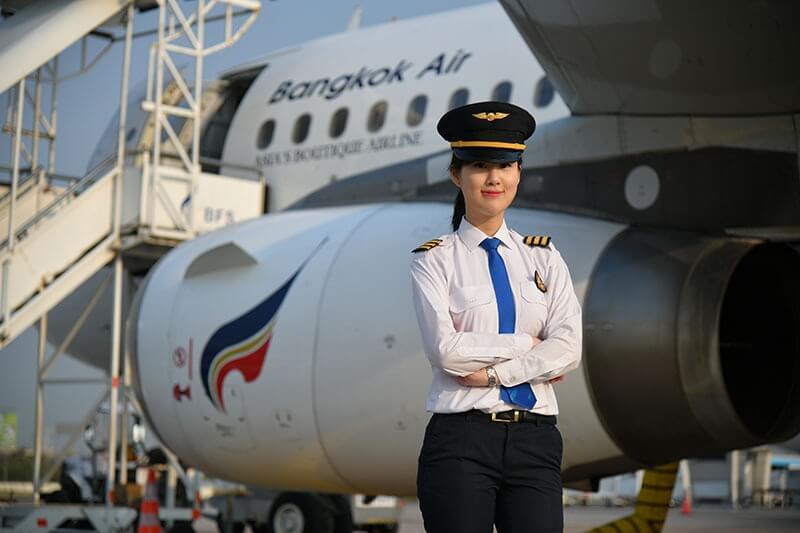 It’s a space she’s at home in. With an economy of movement, she snaps a runway map into a waiting clip, unfolds a small table and flips open a preparation checklist, all in a matter of seconds.

“The FMGS [Flight Management and Guidance System] here is really the beating heart of this,” she says casually while entering coordinates into a calculator-looking device to her left.

All settings must be checked every half hour, she explains, before gushing enthusiastically about the traffic collision avoidance system’s many amazing features.

Julie’s fascination with the technical started early – she shined at math and chemistry and loved crushing her enemies in online games.

“They say there’s three types that become pilots: athletes, musicians and gamers,” Julie said. “I’m the last type.” In her down time, she still plays some Battlefield, Ragnarok, DOTA and PubG. 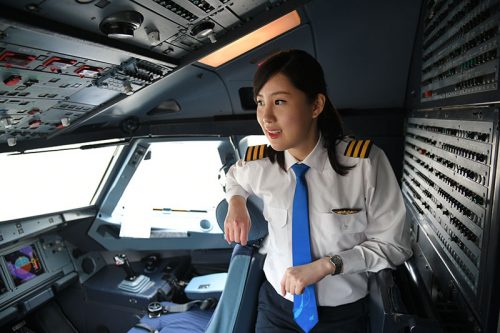 Earning Her Wings
Long before the 29-year-old would rack up more than 1,800 flight hours, Julie’s journey into the skies began not in the cockpit but the cabin. Her first step was leaving architecture in a bold career move. Her first barrier? Mom and dad.

“My parents thought I was wasting my architect education, and they were scared the plane would crash,” Julie recalled.

Julie quickly took to the the takeoff-and-landing life. Being a flight attendant holds a certain glamor and distinction not always reflected by reality but celebrated nonetheless, as in 2008’s roaringly popular soap opera “Battle of Angels” which pit air hostesses against each other as they fought over hunky male pilots. Indeed, becoming a flight attendant is the aspiration of many female university students. There’s a cottage industry of training courses, and many who get the job end up becoming minor net idols on social media.

But Julie, having trained as an architect, yearned to make better use of her math and technical skills. Maybe she could fly the plane? Society left fewer markers for that path.

“I used to think only guys could become pilots,” she said. “Then I saw that I was eligible, but not all airlines accept female pilots.”

A professional pilot tutor says that those decisions are left up to the airlines.

In addition to Bangkok Air, recruitment posters for AirAsia show smiling male and female captains. Nok Air also accepts women applicants and said that 27 percent of its 2016 recruits were women. Those numbers could rise – Julie shows a photo of a recent batch of 17 graduating Bangkok Airways pilots, six of whom – 35 percent – were women.

Bangkok Airways became the first Thai airline to recruit women pilots in 1990. Of the airline’s 358 pilots, 34 today are women. Overall, only 3 percent of the 6,749 commercial pilots licensed in Thailand are women, according to civil aviation authorities.

But before she’d be let in the cockpit, Julie had to pass rigorous, competitive testing which only had a 2 percent pass rate. And she had to do it within five years.

“It was very competitive. Out of maybe 800 people taking a test, 16 would pass,” she said.

There were tests on math and physics. Aptitude tests requiring candidates draw lines with pencils in each hand as their table was knocked around while simultaneously solving math problems.

After two and a half years of drilling and testing, Julie passed.

“I believe in 99 percent diligence, one percent luck. Yes, luck is definitely in the equation, but diligence is much more important,” she said. 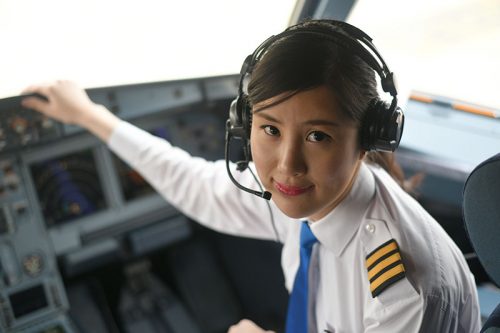 Ground Control
Julie says there is opportunity for female pilots, but they’ll need to be prepared for the martial culture of flight school that comes after the exams.

“The teacher would whack the limbs of guys if they made a mistake. It’s a traditional way of teaching for Thais, especially in the army,” she said. “The pilot is risking lives. There has to be a correction right away, and the fastest way is by a quick smack, so they know to stop it.”

For an entire year, Julie and 16 other student pilots bunking on campus woke at 5am to jog, then fly small aircraft as they worked their way up to larger Airbus airframes.

“It was a year of no makeup,” she said, laughing. “Everyone gets up to exercise around the golf course, and they only let you have a few minutes to shower.”

Discipline was not blind to gender, at least not with the male instructors.

“He would say, ‘If the student is flying badly, then it’s my fault,’ and he would hit himself instead of hitting the girl. We would laugh, but I would feel guilty, so it still works,” she said.

Graduating from the year-long course in 2016 with at least 200 flight hours meant earning their wings in a ceremony.

Like other professional training, it left her saddled with debt – a year of pilot school cost 2.5 million baht; today it’s closer to 3 million baht – roughly the annual salary of Thai pilots.

But she still hasn’t reached her flight ceiling. She has about 1,000 hours to go before she can earn her epaulettes and buckle up for the testing necessary to become a full captain. Follow her journey on Instagram. 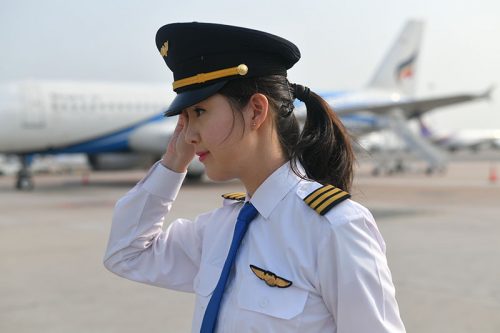 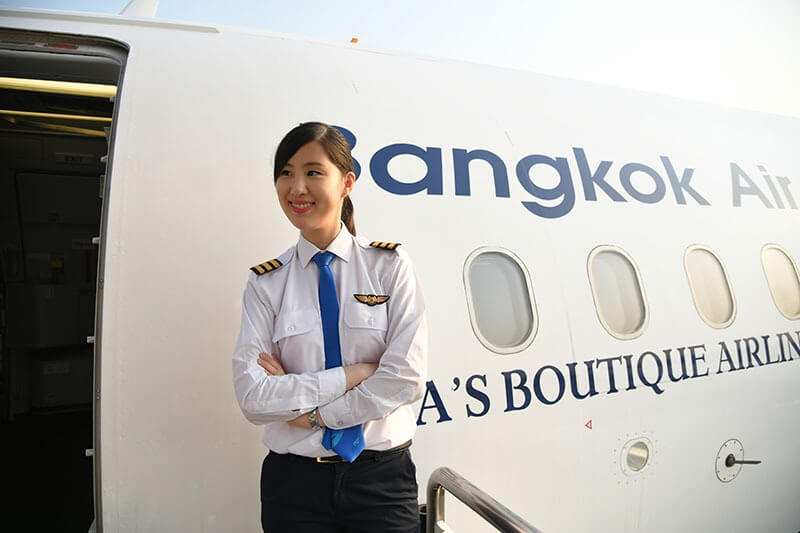 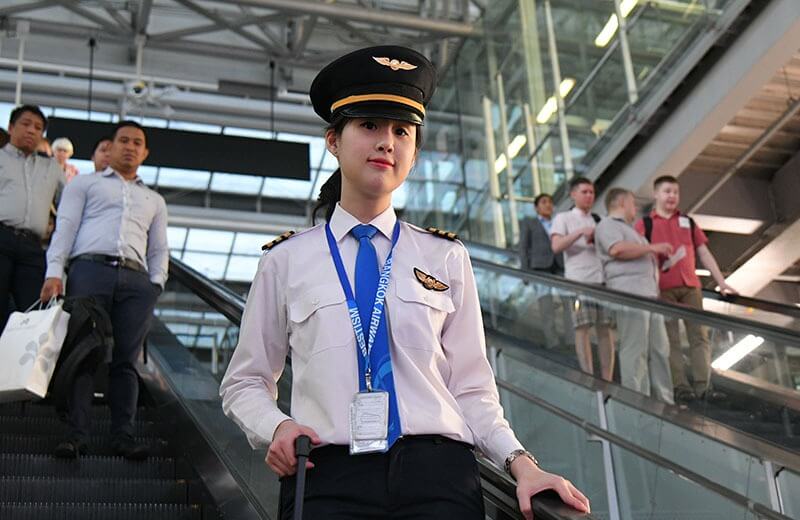