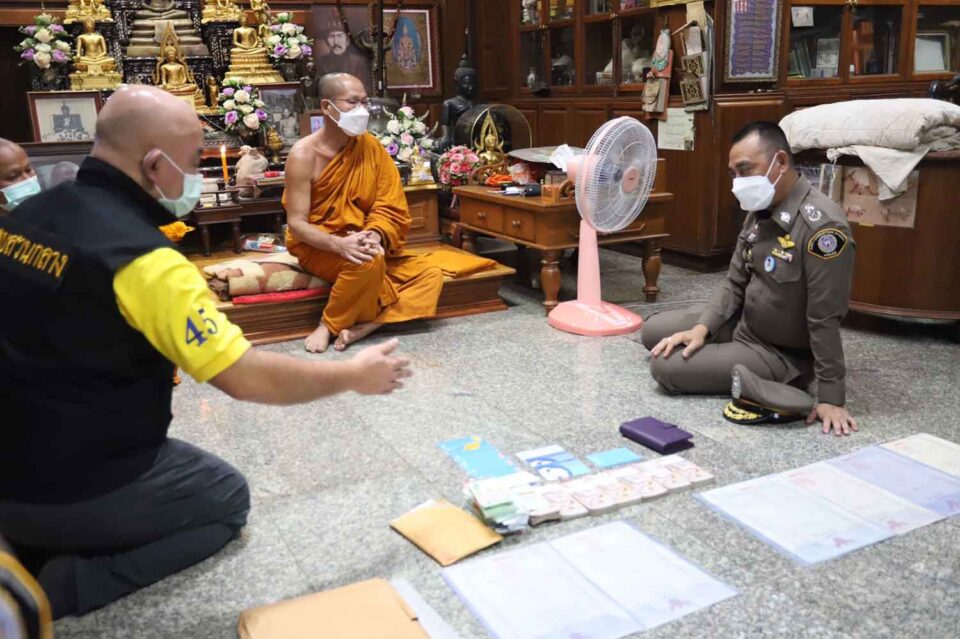 The president of the Chanthaburi provincial administration organisation, a temple abbot and two other people have been arrested for alleged theft of 17 million baht earmarked for the Chanthaburi Buddha Monthon Foundation.

About 100 people were involved in the operation, he said – police from the Counter Corruption Division and officials from the Office of the Public Sector Anti-Corruption Commission.

Arrested in the operation were:

– Thanapon Kijakarn, president of the provincial administration organisation of Chanthaburi;
–  Puwanat Bamroongpan, former director of the PAO’s planning and budget office;
–  Phra Khru Suthitarakapirak or Phra Khru Palad Nathadanai, the abbot of Wat Suthiwari, who is the sangha chief of Soi Dao district and a member of the Chanthaburi Buddha Monthon Foundation; and
– Ketsayam Ruamdi, of Siamchangburapa Limited Partnership, a construction contractor.

The two other suspects were detained at two other locations.

Many assets and valuables as well as some documents were seized.

The investigation began early this year when the CIB received many complaints asking it to look into the embezzlement of a fund provided by the Chanthaburi PAO to support the Chanthaburi Buddha Monthon Foundation ever since it was founded in 2009.

The alleged fraud was found in fiscal year 2011-2012, during which Mr Thanapon, as the PAO president, approved a fund of 30 million baht for the construction of a building for the foundation.

The foundation contracted Siamchangburapa for 12.7 million baht to contruct the building. The remaining 17.26 million baht was to be returned to the PAO.

But, Mr Thanapon, who was also the secretary of the foundation, allegedly did not return the remaining money to the PAO.

Instead, he ordered Mr Puwanat, then director of the PAO’s planning and budget office, to draw up a false contract showing the entire construction cost to be 30 million baht – with collaboration from Phra Khru Suthitarakapirak, an assistant treasurer of the foundation, and Mr Ketsayam.

The false contract was attached to the work report to the PAO, concealing the fraud.

The investigation also found that the foundation never reported to annual meetings.

Chanthaburi Buddha Monthon is located on land at Moo 3, tambon Ban Kacha, Muang district and was set up in 2009. It comprises many buildings used dhamma practice.

Between 2009-2013, the Chanthaburi Buddha Monthon Foundation received a total of 106 million baht in support from the PAO