As the 178-year-old company prepares for last-ditch talks with creditors and shareholders to save itself from falling into administration, British tourists staying at the Les Orangers resort in Tunisia said armed security guards were stopping them from leaving.

They said gates were being kept shut while the hotel demanded guests coughed up extra fees out of fear the company wouldn’t manage to find the £200 million it needs to be saved and pay what it owes.

One elderly woman reportedly forked out £2,000 when ordered so by staff, despite having already paid Thomas Cook for all her travels.

Ryan Farmer, from Leicestershire, said the hotel had summoned all guests due to leave yesterday afternoon in reception and told them ‘to pay additional fees, obviously because of the situation with Thomas Cook’.

With many tourists defying the demand as they had already paid the travel company, security guards were keeping the hotel’s gates shut, refusing to allow guests in or out.

Mr Farmer said: ‘We can’t leave the hotel. I’d describe it as exactly the same as being held hostage. ‘We’ve been up to the gates. They had four security guards on the gates, holding the gates closed, and were not allowing anybody to leave,’ he told BBC Five’s Stephen Nolan Show.

He said the guards were not responding to any pleas from guests to be allowed out.

‘They just look at him and laugh and continue to hold the gate shut.’

The holidaymaker added: ‘A Thomas Cook representative is trying to sort things out with the hotel, but they’re just not interested.’

Thomas Cook, which employs around 22,000 people worldwide, has become saddled with £1.6 billion of debt.

It will hold a final crisis meeting this morning to find a way to plug the £200 million hole in its finances at city law firm Slaughter & May.

A collapse would see 150,000 UK holidaymakers stranded overseas and throw the travel plans of many others into jeopardy.

The government has been called on to save the company, which currently has 600,000 customers on holiday, including up to 160,000 Brits. 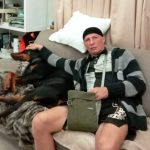