This is the amusing moment a bossy pet tortoise chases away two bulldogs.

Three-year-old Mama was wandering around the garden with the when the two puppies were let loose on Monday afternoon.

The curious ‘exotic bullies’ breed of dog – three-month-old Joker and five-month-old Coke – walked cautiously towards Mama to try to play.

But the surly tortoise turned the tables and became the ‘bully’ herself by chasing away the dogs from her territory.

She even head butted and kicked out at the two bulldogs which were left shaking in fright – far different from their fearsome reputation.

The two dogs were then both too scared to go near the bossy reptile at owner Weeraphat Ken’s garden in Chiang Mai.

Weeraphat, 31, said: ”Mama is the boss, even with dogs. I think she wanted to show them that she was in charge. She was quite aggressive, that’s why we call her Mama.

”Most people think that bulldog breeds are aggressive but these two are just puppies and they were scared of a tortoise.

”I’m hoping that they will get used to to being around each other and can play together soon.” 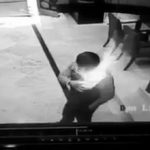