Home » Anthony Joshua vs Jarrell Millar: Press Conference Face Off Bust Up As Millar Tries to Floor Joshua! Security Forced to Step In 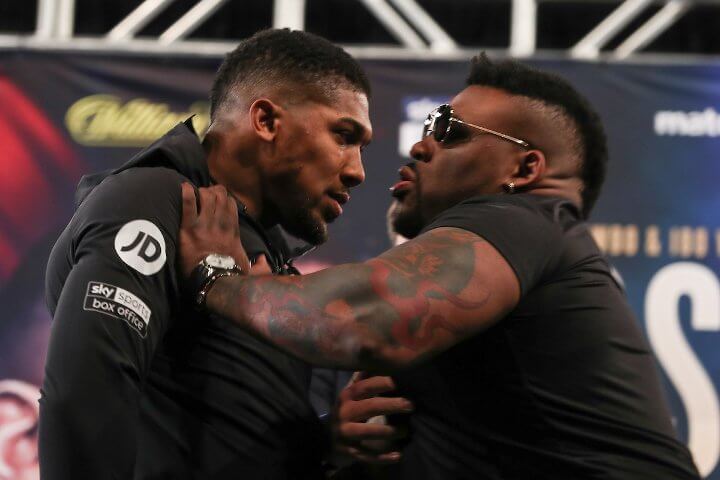 With countdown just over 100 days, Anthony Joshua and Jarrell Millar clashed at their heated press conference with Millar attempting to push IBF, WBA and WBO champion Joshua across the stage as the pair faced each other close up. Security quickly stepped in.

Joshua replied: “He’s just stupid and ignorant. He can’t punch and he hasn’t got a great work rate. He’s an ex-PED user and kickboxer. He hasn’t got a brain cell so it was easy to get in his head. “He’s coming up against a true fighter and he can’t beat me on his best day. I’ll beat Miller and knock him out.”

And followed that up with: “He punches like a fairy. The softest puncher in the heavyweight division. I’ll ram my jab down his throat then knock him out. I’ll be deadly serious. Jarrell can’t beat me, not even on his best day.”

“AJ is in my way. Yes, he won the Olympics. It’s okay for me to be the underdog. He didn’t want this fight first. He wanted easy money, Dillian Whyte. He has got to earn the right to eat at my table. This is the New York table. He can be the pretty boy. I will still grind it out.”

The press conference ended with Millar storming off and AJ making a comment about Millar’s acting being something which might have been more at home in some Hollywood movie.

It’s not the first time Jarrell ‘Big Baby’ Millar, 30 who started his career as a Muay Thai fighter when he was 14 before he later moved into boxing and kickboxing, has used a New York press conference to create his special brand of chaos. In 2018 he poked his nose in during Joshua’s and Alexander Povetkin’s press conference

But he’s the number two fighter in America with 24 victories and one draw in his 25 fights. He has 21 knockouts. He’s six feet three inches and comes into the ring at 300 pounds.

With AJ, also on 21 knockouts, the question is which fighter will reach 22 first?

Eddie Hearn, who Millar referred to as AJ’s pimp, commented that he expects at least 10,000 Brits to watch the fight at Madison Square Garden.