Home » Zebra Crossings to be made “safe” says Chief of Royal Thai police, progress already being made locally

The Chief of the Thai Royal police has stated this week that he has ordered enforcement of zebra crossings across the country and to begin work to ensure that they are safe, especially in tourist towns such as Pattaya.

Local residents and tourists alike seem to avoid the crossings and instead jaywalk across the street as most locals in the city believe that the set crossing is the most dangerous place to cross the road.

However, in what may surprise some of our local residents, significant work has already been done locally to make the crossings safer, especially in school zones. The following pictures, taken today, are of traffic police specifically stationed at crossings in and around schools during school hours, enforcing the law and making sure the crossings are safe. The safety of these particular crossings near schools has been successful for some time.

However, it will take some time to ensure the crossings in the primary tourist locations of Second Road and Beach Road are properly enforced and used.

The plan for enforcement includes using traffic police at major zebra crossings during the busiest times, as well as enforcement for jaywalking which is, technically, against the law and is a fineable offense. 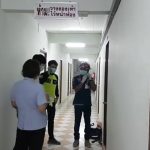 Neighbour complains about rotting smell as dead body is found 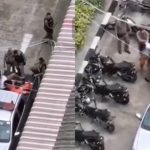