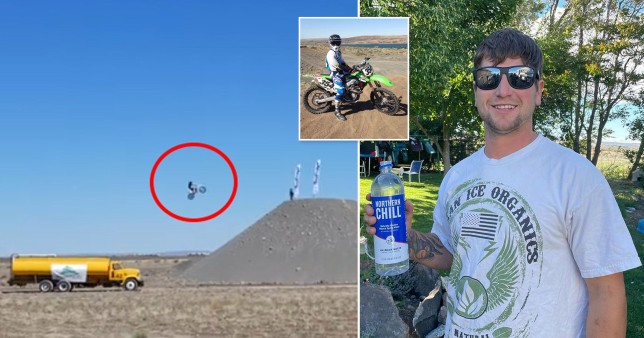 A father-of-two stuntman died after crashing while trying to jump a 150ft gap on a motorbike.

Daredevil Alex Harvill sadly lost his life on Thursday as he practiced for a world record 351ft motorcycle jump, scheduled for this weekend.

The horrific crash, which happened at the Moses Lake Airshow in Washington, was captured on video and shows how Harvill came up short on the landing ramp after jumping 150ft over a number of vehicles.

The impact of the crash launched Harvill into the air and he suffered fatal injuries. According to iFIBER One, the practice jump was his first of the morning.

The Grant County Coroner said that Harvill, who announced the birth of his second child last month, died as a result of his injuries.

An autopsy is scheduled to be performed on Friday to determine the stuntman’s cause of death.

‘Our deepest sympathies go out to Alex’s family, friends and loved ones’, the Grant County Sherriff’s Office said on Facebook.

The stuntman was listed as one of the featured events in the airshow at the Grant County International Airport, set to run from Thursday to this coming Saturday.

After the crash, the airshow vowed to donate proceeds from the jump towards medical expenses for Harvill and his family.

In May 2012, Harvill, from Ephrata, Washington, set a world record at Toes Motocross Park in Royal City, Washington, for ramp-to-dirt distance jump, which he clocked in at 425 ft.

A year later, he went for the world record for dirt-to-dirt distance jump.

As well as stunt work, he also competed in a number of motor sports, including the Canadian MX National Series, AMA Motocross, AMA Supercross and Arenacross.

A month before his tragic crash on Thursday, Harvill announced his plans to tackle the world record on his website.

He said: ‘I will be attempting another world record jump at this years airshow here in Moses Lake Washington. This time it will be Guinness World Records official for the ‘Ramp to Dirt’ Motorcycle Distance Jump attempt.

‘The current Guinness record is held by Robbie Maddison who has courageously pushed the sport in many ways over the years’, he continued.

That record was set by Maddison over 13 years ago, back in March 2008.

Ahead of his record jump attempt, the stuntman told the Columbia Basin Herald that he had been riding since he was aged just four.

In 2017, Harvill suffered an injury after taking a jump too fast, resulting in a hard landing that sent him flying over the handlebars, shattering a heel.

The accident forced him to reconsidering his racing career, though he ultimately got back into the sport and was even winning races prior to Thursday’s tragedy. 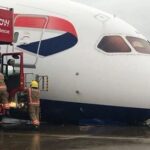 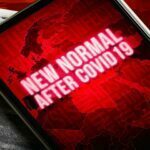 Restrictions to be lifted in maximum and strictly controlled areas