Home » The World’s Smallest Condom Has Hit The Shops

Having an appendage that is a little too small for a condom is not something that many blokes want to admit, but the struggle is definitely real.

While men might not want to own up to insufficiently filling their condoms, the trends towards buying small-sized sheaths does suggest that they are willing to part with cash in an attempt to fix the problem.

Now, a UK-based company has announced the world’s smallest condom in an attempt to (e)rectify the problem. 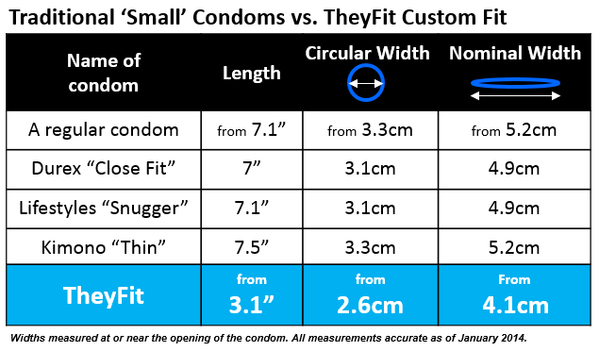 They’ve come up with a range that starts at just 3.1 inches long, with a width of 2.6 cm and a nominal width of 4.1cm, almost half the size of condoms that are already sold to the public as small-sized.

In fact, according to TheyFit, most condoms marketed as smaller sized are not much smaller at all.

“Do you find that condoms are much too long for you?” the firm says on its website.

“Do they slip or fall off entirely during use? It’s an extremely common issue.

“How about when you try supposedly small condoms that are labelled things like ‘Snug’, ‘Iron Grip’ or ‘Close Fit’? Do the problems remain? It’s because such condoms aren’t actually that much smaller.”

The company provides graphics that prove that the regular condom – usually 7.1″ or longer, 3.3cm in width and with a 5.2cm nominal width – isn’t much different from a range of other ‘smaller’ ones, which begin at 7 inches and are usually 3.1 cm wide and around 5cm in nominal width.

“Do you see the problem?” it continues. “Traditional small condoms, including those labelled ‘Close Fit’, ‘Snug’ and ‘Iron Grip’ aren’t actually that different in size from regular condoms.

“In fact all of these supposedly small condoms are still at least 7 inches long.

“Finding out that a condom is too long for your requirements is a really common problem experienced by the majority of men.

“Indeed millions of men every single day are searching the internet for small condoms and a real solution to their problem.

“But it’s not so much that you need a small condom – it’s that traditional condoms are much too big for most men!”

The concept of nominal width is important, according to TheyFit.

“Don’t worry if you’ve never heard of nominal width – most people haven’t; even though in Europe is has to be printed on every condom box,” they write.

“It measures the width of the condom at or near its open end when it is laid (squished) flat.

“And to get a great fitting condom, you have to choose the correct nominal width for your requirements (your girth).”

Obviously, this science has a purpose – to get you to buy smaller condoms that fit. Whether or not you do that is up to you, but it is kind of interesting that you’ve been mis-sold these things.

After all, it’s the size that counts, right?