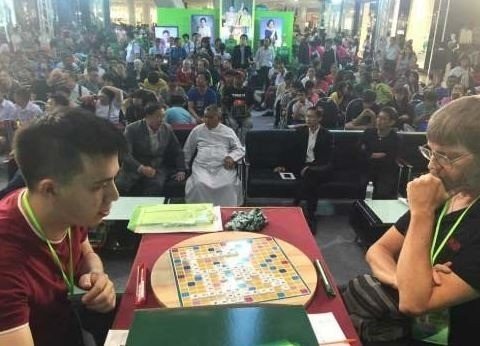 The world of tournament Scrabble – a highly popular game in Thailand – was rocked at the weekend when a leading Thai player was ejected from a tournament in Chonburi.

Pichai Limprasert, who was banned for a year in 2017 after being found guilty of palming a tile and fraudulently entering the University Games, was thrown out of the Eastern Scrabble Championships at Pacific Hall, Pacific Park, Sri Racha.

Fellow players alleged that he was secretly holding a letter P and a valuable ‘blank’ tile under the table during the early stages of an important game.

He claimed that he had overdrawn and was going to own up but the organizers threw him out at the end of day one of the two day event.

Thailand is known as one of the foremost countries for professional and student Scrabble in the world. It is played in English and called Crossword Game for contractual reasons.

It is home to regular prize money tournaments and has thousands of rated players.  Two previous world champions came from Thailand, the first non-native English speakers to triumph.

The game attracts patronage from the Thai Royal Family and sponsorship from major Thai businesses and corporations keen to promote the English language game as an educational tool.

Pichai who had hovered around number 5 or 6 in the rankings for several years suddenly started improving rapidly in early 2016, a meteoric rise that even saw him make the final of the iconic international Brands King’s Cup held midyear in Bangkok and worth $10,000 to the winner.

There – after eight tournament wins in a row including in Chiang Mai, Udon Thani and Sri Racha – he was finally beaten by the world’s greatest player, Nigel Richards of New Zealand in a three game final on stage at a major Bangkok shopping center. Then Tourism Minister Kobkarn Wattanavrangkul presented the prizes.

Since returning from his ban Pichai has continued to win many tournaments though Thaivisa understands that following his one year ban he was told if there were any further infractions he would be banned for good.

In Sri Racha last weekend it was claimed that Pichai was palming tiles by keeping two in his hand under the table then at an advantageous time surreptitiously replacing ones on his rack to make high scoring “bingoes” using all seven tiles on his rack. Such plays get a 50 point bonus.

The Thailand Crossword Game Club have not officially announced a ban.

Pichai won the 2019 Thailand Grand Prix Championships (a three leg event held in Bangkok in March to May ) winning prize money and an air ticket to compete in Goa, India as a Thai representative for the WESPA (World English Language Scrabble Players’ Association) Championship, in October. The event is a de facto world championship.

Bus conductor fired, firm fined for molesting ladyboy on board