Home » Women Slammed After Filming Themselves Forcing Pup To Smoke

Two women have been hit with a massive backlash after posting a video of themselves forcing a tiny puppy to smoke.

Rattiyakorn Prangthong and a woman named only as Tango, shared a clip online of themselves giggling while filming the little pup asleep with a lit roll-up in its mouth.

In the clip the dog, which is reportedly a Staffordshire Bull Terrier, can be seen inhaling as the women poke and prod it.

Since being shared online hundreds of angry people have slammed the women for their shameful behaviour, while others have demanded that authorities in Bangkok, Thailand – where the clip was reportedly made – step in to check the dog is safe and remove it from the women.

One incensed animal-lover wrote: “This is a stupid thing to do.

“If you have a puppy you have to take care of it, not use it like a silly toy to make jokes with.

“I wish that somebody would take the puppy away from them. I don’t think that’s a healthy thing for it to be doing.”

However, Rattiyakorn has since responded to the criticism, saying that the dog was fine and that they take ‘good care’ of him. 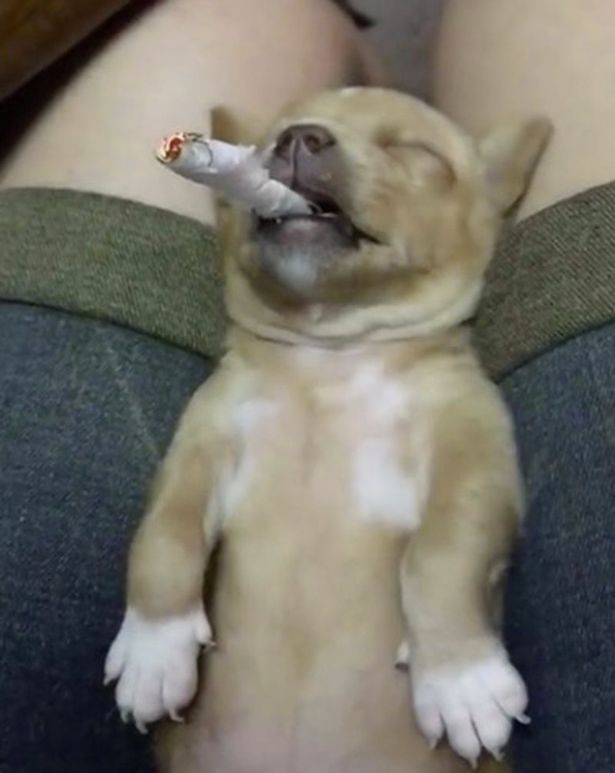 She said: ”We haven’t been cruel towards the dog. We have taken good care of him and he is healthy.

”We are dog lovers. I understand that everybody loves animals and wants to make sure he is not hurt.

“I’m sorry to all the people who have dogs, too.”

Meanwhile, a more repentant Tango added: ‘We have to apologise and accept responsibility. We won’t do anything like this again.

“The criticism has had a bad impact on everyone around us and our family.

“It has made us more conscious of the issue.”

Earlier this year, the PDSA warned smokers about the dangers of passive smoking to their pet.

PDSA vet Olivia Anderson-Nathan said: “Many pet owners are unaware of the risks that smoking can have on their pets’ health.

“If they knew, I’m sure they would want to protect them.

“Our vets and nurses regularly see the devastating impact smoking can have on pets.

“Problems range from issues like asthma and chronic coughing through to fatal conditions.

“Cancers such as lymphoma, for example, are twice as likely in cats exposed to cigarette smoke.

“Recent studies highlight that this is a really serious issue, and we want pet owners to know that they can make a real difference by simply choosing to smoke outdoors away from their pets.”

‘Real-Life RoboCop’ To Be Used At The Tokyo 2020 Olympics