A woman reportedly with a long record of theft stretching over nearly 10 years was arrested in Bangkok late Monday night after she allegedly made off with two luxury wallets she had asked an online seller to show her prior to buying.

Yannawa police station chief Pol Colonel Pornnarong Suriyachaiwong said on Tuesday that Ploypiriya Lua-aroon, 32, had been arrested inside a hospital on Silom Road.

Pornnarong said her latest victim was an online seller who had been robbed of two luxury-brand wallets.

Ploypiriya used a tactic of telling online sellers to bring bags for her to buy at the lobbies of condominiums where she claimed to be staying, the station chief said.

When the sellers arrived, she said she would take the bags upstairs for friends to check whether they were genuine, but she then failed to reappear, leaving the duped sellers waiting to no avail, he added.

Pornnarong said some of her victims had posted messages on their Facebook walls to warn other vendors about the woman’s scam.

Ploypiriya claimed she had cheated Facebook sellers with this tactic four times since April, but police suspect there were more victims than she was prepared to admit to.

Pornnarong said police had checked and found that the woman had a long criminal record involving thefts in 2009, 2010, 2011, 2015 and 2016 within the jurisdictions of several Bangkok police stations. 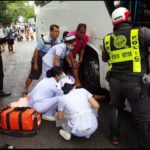