A woman was killed and a man severely injured in Nakhon Ratchasima province when a lightning struck a rice field hut where they had stopped by due to the heavy rains on Friday evening.

Police were alerted to the incident at about 5pm and rushed to the scene in Ban Ta Chan village, Tambon Ta Chan, in Khong district with rescuers.

As his condition was too serious for the district hospital, Somyos was taken from there to the provincial hospital.

Witnesses told police that the two were returning home from their rice field when it started raining heavily. They took refuge in the hut but it got hit by a lightning.
nation 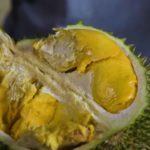 First ‘volcanic durian’ of year goes for Bt150,000 in auction