A woman was napping in her seat on a public bus in Hong Kong On the 13th of January this year. Suddenly, a man sitting behind her took out his scissors and cut off a big chunk of her ponytail. The woman was napping unconsciously while all of this happened and was extremely shocked when she woke up to realize that almost half of her hair was missing.

Mr. Mo the driver of the bus reported to Chinese media that the main cause was the ponytail that kept on hitting the leg of the man behind her. Mr. Mo further added that the man didn’t try to wake her up and suddenly out of nowhere took out his own personal scissors and proceeded to cut off about 15 centimeters from the women’s ponytail.

A witness who saw the whole incident came forward and stated that the man acted strangely since he got on the bus. After a while, when the women’s hair started to touch his leg, he tugged her hair a few times to wake her up or at least to make her notice that her hair was bothering him but she never woke up.

When he couldn’t take it anymore he pulled out a pair of scissors from his bag and cut off a big chunk of her hair with one swipe. When this occurred, many passengers on the bus called out the man on what he was doing. The man then pretended to fall asleep with his arms across his body. He continued to ignore the comments and then tried to leave the bus but the other passengers blocked the door.

After the incident, the bus driver then parked at a bus stop that was near a police station. The police then came to check out what happened and found proof of the victim’s hair laying on the bus floor. The police performed a search on the man and discovered the scissors used to cut the hair in his bag.

The man was taken into police custody and the woman was not physically harmed but is sadly hurt by the loss of her hair.

Tesco Lotus to give away 20,000 N95 masks to customers and colleagues in 10 districts of Bangkok with highest dust concentration 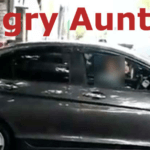 Angry auntie parked her car in the middle of the road to take a nap.