This was the moment rescuers caught a 10ft long python after a woman found in hiding in her bedroom.

Kesinee Jittakit, 53, was getting ready for bed yesterday last Thursday night when she heard the serpent hissing.

The terrified mother-of-two then spotted the 10ft long snake hiding under a table among shoe boxes.

She fled the house in Chachoengsao province and called police who sent a team of snake catchers.

The men found the reptile which they believe was hunting Kesinee’s pet cat, named Mandalay.

They grappled with the serpent as it writhed angrily to try and escape. Eventually snared the creature and crammed it into a sack to be released safely back into the wild.

Kesinee said: ”I was just going to bed and I saw the huge snake. It scared me more than I’ve ever been before.

”I’m scared of sleeping in the bedroom now. I’ll just stay on the sofa for a little while.

”I’m happy it’s gone now and that my pet cat Mandalay is safe.”

Rescuers said that the monsoon rainy season is likely to have caused the snake to flee its natural habitat before it saw Kesinee’s kitten and entered the house to try and catch it. 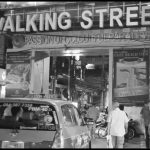