After climbing and dangling over structural cables inside Suvarnabhumi Airport for hours, an unidentified foreign woman fell – fortunately onto an inflatable mattress.

The woman, aged between 25 and 30, was then rushed to a hospital, where she was in a safe condition late on Wednesday. The airport’s vice president, Kittipong Kittikachorn, said the mattress was installed as part of an emergency-response plan. He said his team spent more than two hours trying to persuade the woman to climb down, but to no avail.       “But over the period, as she climbed from cable to cable, she also moved downward from the sixth floor to the fourth floor. The distance from her position and the floor was thus reduced,” he said.

The woman was spotted walking on an expressway in Bangkok at about 3am on Wednesday. When they received the report, expressway officials rushed to pick her up and handed her over to tourist police at Suvarnabhumi Airport. Tourist police officers tried to interview her but she said nothing. To relieve her stress, she was provided with food and water. Then, later in the day, she climbed onto the structural cables. Airport officials said they would contact the relevant authorities to try to identify the woman and speak to her. A source said a tattoo on her back read “Olympic 2014”.  Source: Asia Nation 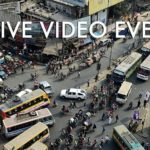