British, US and Australian tourists at ‘drug-fuelled’…

A woman has been blinded after her boyfriend’s secret gay lover confronted her and hurled acid in her face in a jealous rage.

Glory Cuerda, 27, began dating John Rey Garay, 30, and was unaware he was still seeing his male partner Ramon ‘Mona’ Colada, 30, behind her back.

When she discovered his homosexual double-life, Garay told Cuerda that the relationship had ended but the two men carried on seeing each other.

But when Colada found out about Garay’s new romance, he went to the shopping mall where they both worked and threw acid in his love rival’s face.

Cuerda has now been left with severe facial burns and lost her eyesight after the attack in Pasay City, the Philippines, on July 20.

Devastated Cuerda said: ‘This was the first time I saw my boyfriend’s gay lover, although I had been hearing rumours for a while that John Rey had a gay boyfriend and he was cheating on me.

‘We had a confrontation and he told me that he had broken up with him a few weeks before.’

Cuerda said the attacker called her over to the back entrance of the mall where she works as a shop assistant and her boyfriend is a security guard there.

The injured woman added: ‘He even cried to me and told me how he loves John Rey so much. He said they had been together the whole time I had also been dating him.

‘I went to the back entrance with him because he told me he brought some of John Rey’s belongings.’

The attack happened when Cuerda went with Colada to collect some bags of her boyfriend’s belongings, but before they reached the exit, he took something from his bag and threw the contents on her face.

Cuerda added: ‘I felt my face melting. I couldn’t see anything. I just wanted gallons of water to wash my face. It hurt so bad.’

He said: ‘It was an alkali burn. It is one of the worst injuries that can happen to the eyes. You can get permanent blindness from it because the surface of the eyes will melt.’

However, the doctors said that there is a chance for Cuerda to see again if she receives the proper care.

Colada was arrested by the police in his hometown in Bicol province where he was detained by police. He said he regrets everything he did. 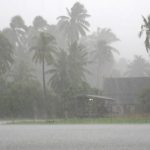 PM announces 10pm to 4am nationwide curfew – (Yes this does include...

Mark KellyApril 2, 2020
PM announces 10pm to 4am nationwide curfew – (Yes this does include Pattaya). In a...
END_OF_DOCUMENT_TOKEN_TO_BE_REPLACED