The wife of a Japanese journalist kidnapped in Syria more than three years ago broke her silence Tuesday to plead for his release after he appeared in a hostage video.

Jumpei Yasuda, a 44-year-old freelancer, was kidnapped in the war-torn country in June 2015, and appeared in a rare video that emerged last week warning that he was in a bad situation.

“There are a lot of people in Japan — his family, relatives, friends — waiting for my husband,” his wife Myu told a news conference in Tokyo.

“Please return my husband safe as soon as possible,” she said tearfully. “As his wife, as his family, I want him… to set foot back on Japanese soil.”

Last week Yasuda and captured Italian national Alessandro Sandrini appeared in two separate videos that were similar in their staging.

Both men were wearing orange outfits similar to those of captives in jihadist hostage videos, with armed men whose faces were covered standing behind them.

The videos did not identify which group was holding the men or include specific demands.

Myu, who married Yasuda in 2008, said she had previously avoided speaking publicly about his abduction for fear she could affect negotiations for his release.

But she said when she watched the video, she felt her husband’s situation was “not optimistic but urgent” and decided to publicly seek his release.

The video also prompted some of the journalist’s friends and family to form a group to free him, campaigning to boost public awareness of the abduction.

Yasuda is thought to have been seized by the group previously known as the Al-Nusra Front, a former Al-Qaeda affiliate, in northern Syria.

But with the shifting territory of Syria’s complicated conflict, it is unclear whether he is still being held by his original abductors or has been transferred to other captors.

In the latest video, he identified himself as Korean and gave a different name, but spoke in Japanese.

He gave the recording date as July 25, saying he was in a bad situation and asking for help.

His wife said she had no idea why Yasuda had identified himself as Korean in the video, but confirmed that it showed him and that he is Japanese.

She said Japanese government officials were in frequent contact with her but she was not aware if a ransom had been demanded.

In 2015 militants from the Islamic State group beheaded Japanese war correspondent Kenji Goto and his friend Haruna Yukawa in Syria.

The Japanese government was criticised for what detractors saw as its flat-footed response to the crisis at the time, including apparently missed opportunities to free both men. 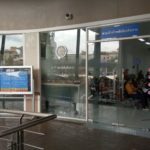 Thais race to get their passports: