Home » WHEN AND WHERE TO CATCH POPE FRANCIS IN BANGKOK 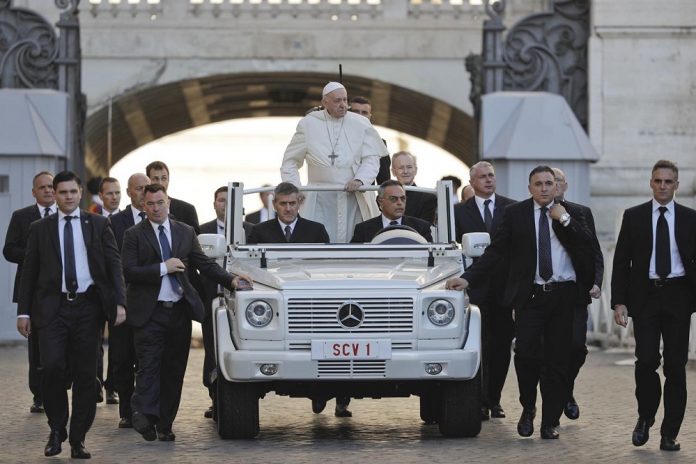 Pope Francis will roll down the streets of the Thai capital in a locally-made, electric Popemobile during his apolistic visit this November.

Pope Francis’ Thailand visit will include an audience with the King, Gen. Prayuth Chan-ocha, the Buddhist Patriarch, and two (fully-booked) Holy Masses, according to detailed itinerary released by Thai Catholic officials at a press conference Monday afternoon.

“The point is to be able to get everyone close to him as possible,” Monsignor ViThanya-anan, deputy secretary-general of the Catholic Bishops’ Conference of Thailand said. “Even if its full, we will do whatever we can. Even people who can’t get in but are outside will be able to see it live.”

According to today’s announcement, the Pope will depart Rome Fiumicino Airport on Tuesday Nov. 19, and arrive Nov. 20 at 12:30pm at the Military Air Terminal 2. It would be his 32nd trip out of Italy and fourth visit to Asia.

At 9am on Nov. 21 he will arrive at the Government House and meet Gen. Prayuth Chan-ocha at 9:15. Fifteen minutes later he will meet with government authorities, diplomats, and other bureaucrats, then give a speech.

His Holiness is scheduled to visit the Supreme Buddhist Patriarch at Wat Ratchabophit at 10am.

From 11:15am, he will meet with the approximately 1,000-strong medical staff of St. Louis Hospital, and give a greeting, before visiting the infirm at noon. Afterwards, he will lunch at the Apostolic Nunciature.

At 4:55pm, the Pope will have private audience with King Rama X at Dusit Palace.

His largest Holy Mass at the National Stadium is scheduled to start at 6pm. Due to overwhelming demand where registration for the 35,000 seats quickly filled up, an extra 20,000 seats at the nearby Thephasadin Stadium will also be open for the audience.

Still, Vissanu said he expects around 70,000 people to attend, which includes pilgrims from ASEAN countries and China, especially at least 6,000 Catholics from Vietnam.

“In February when His Holiness visited the United Arab Emirates, which has only 4,000 Christians, the actual people that came were in the hundreds of thousands,” Vissanu said.

Vissanu also said Thai Catholics from out of Bangkok are expected to make their way into the city.

“From Sakhon Nakhon and Ubon they will come. It’s so touching that so many saved up in piggy banks to travel here, that there are not enough buses,” Vissanu said.

The National Stadium mass will be broadcast live on NBT. A total of 150 foreign press teams and 95 local Thai press will be covering the apostolic visit.

On Friday Nov. 22, Pope Francis will meet with priests and other Catholic church members at St. Peter’s Parish in Sampran district, Nakhon Pathom at 10am.

At 11am at the nearby Blessed Nicholas Boonkerd Kitbamrung Shrine, he will meet with Thai and Asian bishops and archbishops. At 11:50am, he has a private meeting with the Jesuits (Fun fact: Pope Francis is the first Jesuit Pope, as well as the first Latin American pope).

After another lunch at the Apostolic Nunciature, at 3:20pm he will meet leaders of other Christian denominations at Chulalongkorn University, a rare meeting of Christian leaders in a country where Christians of all sects made up only 1 percent of the population.

The audience at Chulalongkorn University’s Main Auditorium will fit 1,500 and will be about an hour long.

Finally, the Pope will hold a Holy Mass for youths at 5pm at Assumption Cathedral, with an estimated crowd of at least 7,000.

“This is a casual mass. Young people will have freedom to dress how they want, including ethnic clothes,” Vissanu said. “We as Asians we might be stiff when doing official affairs, and youths in Myanmar were also at first stiff around him. But when he welcomed them with open arms, everyone hugged him.”

Finally, the Pope will leave for Japan at the same terminal he arrived at 9:30am on a Thai Airways flight on Nov. 23. His airline choice is deliberate.

“When leaving a country, he flies on the national airline. When leaving Italy, he flew on Alitalia. So leaving Thailand, he will fly on Thai Airways,” Vissanu said.

The last pontiff visit to Thailand was in 1984 by Pope John Paul II, whose visit was designated as a state visit. Pope Francis’ scheduled audience with King Vajiralongkorn is marked as a “private visit” in the announcement rather than an official one as a state guest to His Majesty.

The upcoming visit also coincides with the 350th anniversary of the founding of “Mission de Siam,” the assembly that oversees Roman Catholic missions in the Kingdom, which was established during the Ayutthaya period.

Thailand is home to a minority population of Catholics numbering 0.58 percent of the population, or 388,468 people with 524 churches, the Catholic Social Communications of Thailand announced in a video at a press conference on Sept. 13. 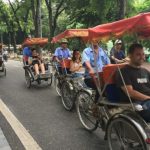