Western powers warn Suu Kyi about Rohingya before a speech.

Britain led world powers Monday in warning Myanmar of potential action if leader Aung San Suu Kyi does not move to end a campaign against the Rohingya minority.

Hours before Suu Kyi delivers a national address Tuesday, British Foreign Secretary Boris Johnson called a meeting on the crisis on the sidelines of the UN General Assembly in New York.Johnson, at the meeting attended by US Ambassador to the United Nations Nikki Haley and Myanmar’s deputy foreign minister, warned that the violence in Rakhine state was “a stain on the country’s reputation” so soon after its transition to democratic rule.”For this reason, Burma should not be surprised to find itself under international scrutiny and on the Security Council’s agenda,” Johnson said, using the former British colony’s earlier name.

“As I have repeatedly said, no one wants to see a return to military rule, so it is vital that Aung San Suu Kyi and the civilian government make clear these abuses must stop,” he said in a statement.Haley called Monday’s meeting “productive” but voiced alarm at the lack of progress on the ground.

“The United States continues to urge the Burmese government to end military operations, grant humanitarian access, and commit to aiding the safe return of civilians back to their homes,” she said.Other countries represented at the meeting were Bangladesh, the chief destination of fleeing refugees, as well as Australia, Canada, Denmark Indonesia, Sweden, and Turkey, according to Britain.UN Secretary-General

Antonio Guterres, speaking earlier to the BBC ahead of the week’s meetings, also said that Suu Kyi had “the last chance” to change course in her address Tuesday.Louis Charbonneau, UN director at Human Rights Watch, called the British-led meeting “the first step, but it can’t be the last.”With world leaders visiting for the UN General Assembly this week, Charbonneau urged work on a Security Council resolution that would impose targeted sanctions, including an arms embargo on the commanders leading the campaign against the Rohingya.Western officials and human rights groups have been especially disheartened as they had campaigned for years for the freedom of Suu Kyi, who spent the larger part of two decades under house arrest by a military junta until her release in 2010.

Suu Kyi’s electoral triumph two years ago had been hailed as a victory for democracy. But the civilian leader, who has a complicated relationship with Myanmar’s army, has been nearly silent after troops drove more than 410,000 Rohingya out of the country.The United Nations has said that the campaign, which witnesses say has included the burning of villages and rape, amounts to ethnic cleansing.Rohingya, who are predominantly Muslim, is reviled by many in Buddhist-majority Myanmar. Asia Nation 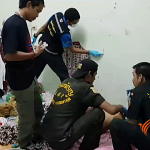 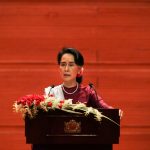