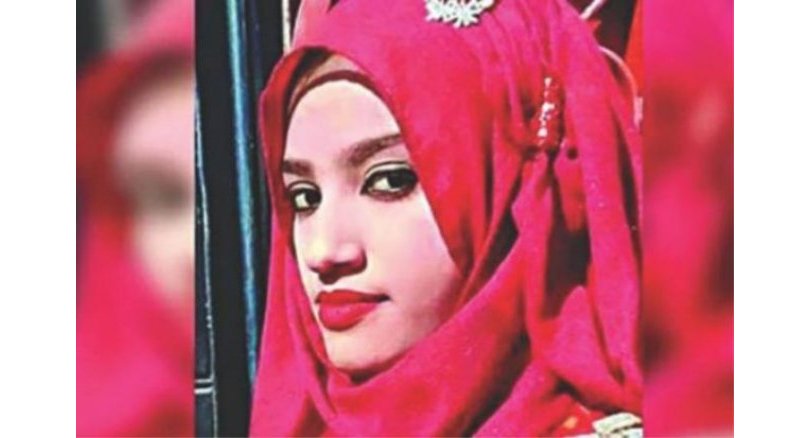 On the orders of a head teacher, sixteen people, split into five groups, took part in the brutal killing of Feni madrasa student Nusrat Jahan Rafi after hatching the murder plot for three days, reveal police.

Siraj plotted to murder Nusrat by setting her afire as she refused to withdraw a case filed against him over sexual assault on her on March 27.

Banaj Kumar Majumder, chief of the Police Bureau of Investigation (PBI), said all this before the media yesterday after finalising the charge sheet against the 16.

Four days after Siraj’s arrest on March 27, his associates Shahadat Hossain Shamim, Nuruddin and several others went to jail to meet him. Siraj instructed them to put pressure on Nusrat’s family members and even threaten them, if necessary, to make her withdraw the case against him.

Siraj’s men then formed a committee to free him with Nuruddin and Shahadat as its convener and joint convener. The committee’s task was to do whatever necessary to free him.

Siraj asked them to increase pressure on Nusrat and her family, and if necessary, kill her by setting her afire, said the PBI chief.

From the Tk 10,000 given by Maksud, Shahadat gave some money to his relative Kamrunnahar Moni to buy burkas.

Later, Shahadat and other accomplices of Siraj met at a tin-shed room beside the madrasa on April 4 and discussed the plot to kill Nusrat.

Nuruddin, Jabed, Jubayer, Umme Sultana Poppy and Moni, among others, were present there.

As per plan, Shahadat, who owns a mobile-credit recharge shop at Bhuiya Bazar, bought one litre of kerosene from a shop around 5:00pm on April 5 and carried it home in two black polybags.

The following day, Siraj’s associate Shahadat, Nuruddin and Kader entered the madrasa between 7:00am and 7:30am.

Shahadat brought a glass from the principal’s room and kept it with a black plastic bag full of kerosene in front of the washroom on the rooftop of the cyclone centre inside the madrasa compound.

Moni brought three burkas and four pairs of gloves, and kept those in a room on the third floor of the cyclone centre. Two other accused — Mohiuddin Shakil and Mohammad Shamim — stood guard in front of the centre so that no one could enter the building, according to the PBI.

Four other accused, Iftekhar Uddin Rana, Imran Hossain Mamun, Abdur Rahim Sharif and Kader took position in front of the madrasa main gate to make sure that only students could enter the madrasa compound.

One of Siraj’s associates, Sonagazi upazila AL president Ruhul Amin, was tasked with dealing with police and keeping an eye on the situation outside the madrasa.

Shahadat, Jabed and Jubayer entered the madrasa around 9:30am and put on burkas on the third floor of the cyclone centre.

Soon after Nusrat entered the madrasa to take the Alim exam, Poppy told her that someone was beating up one of her friends on the cyclone centre rooftop.

Nusrat rushed to her exam hall, some 15 yards from the main gate, and kept her belongings at the hall. She then ran towards the cyclone centre.

Poppy followed Nusrat and stopped her on the second floor. She then asked Nusrat to withdraw the case against Siraj but Nusrat refused.

As Nusrat and Poppy climbed the stairs to the rooftop, Shahadat, Jubayer, Jabed and Moni followed them from the third floor. They threatened Nusrat, asking her to withdraw the case. They also told her to sign a blank paper but she refused, said the PBI chief.

Shahadat then gagged Nusrat. Jabed and Jubayer tore Nusrat’s scarf into two. They bound her legs with one piece and her hands with the other.

Jabed then brought the plastic bag full of kerosene and the glass. He filled the glass with kerosene and poured it on Nusrat. He kept doing it until the bag was empty.

Instructed by Shahadat, Jabed struck a matchstick and set Nusrat ablaze. At the time of the incident, Jabed and the other accused addressed Poppy as Shampa to create confusion about their identities, said Banaj.

After setting fire to Nusrat, Poppy and Moni rushed to their exam hall while Shahadat and Jubayer got down to the second floor and changed their clothes.

They then scaled the boundary wall, dumped the burkas into the nearby madrasa pond and escaped.

Jabed, however, did not take off burka. Wearing it, he came out of the madrasa through the main gate. He took it off at the bank building beside the madrasa.

Nusrat came down from the rooftop after she managed to free her hands and legs from the scarf that got burnt in fire, said the PBI chief.

Police later took her to hospital. With 75 percent burns, Nusrat died at the burn unit of Dhaka Medical College Hospital on April 10, triggering a huge public outcry across the country.