Home » Welcome to Thailand, just wait over there…

Twitter user “Oo Spin9” said that the new “biometric” fingerprint scanning was to blame for the delays, an observation confirmed by a tourist who spoke to Thaivisa.

The Tweeter said: “Welcome to Thailand – and welcome to queues at immigration. Passengers needed to get all ten fingers scanned”.

This went viral being retweeted 5,000 times.

A tourist arriving from Scotland said: ‘It took ages to clear through immigration. There was a huge queue. I had never seen this fingerprint scanning in Thailand before.’

‘As I got near I saw Asian people who couldn’t speak English being asked to scan their fingers and it was very slow due to the language barrier.’

‘My early afternoon arrival was delayed then what with these queues I was caught up in the Bangkok rush hour that I had also wanted to avoid. I got to my destination much later than expected’.

The system has been hailed as state-of-the-art and designed to help keep Thailand secure. 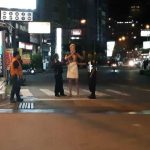