James and Oliver Phelps, the English actors who played Fred and George Weasley in the Harry Potter movies, are currently in Bangkok!

It’s been exactly 10 years since the last Harry Potter book was published (and we still haven’t gotten over Fred’s death). This weekend, the Weasley twins will make an appearance at the opening of “Harry Potter: Christmas in the Wizarding World,” an exhibition that will bring Hogsmeade and Diagon Alley to Siam Paragon, a shopping mall for muggles. Coconuts has reached out to Siam Paragon for details and is waiting to hear back.

Siam Paragon posted a video message from the Phelps twins yesterday. James said he had “heard great things about the country and can’t wait to visit.” Just like the small Harry Potter theme park in Orlando, there will be pop-ups of shops from the series including Ollivanders Wand Shop, Honey dukes, Madam Puddifoot’s Shop, and Dervish & Banges, which sells magical instruments. The “Harry Potter: Christmas in the Wizarding World” exhibition will be hosted at Siam Paragon from Dec. 17 to March 2.  Source: Coconuts Bangkok 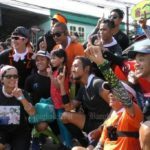