Phra Phromsitti, the abbot of Wat Saket, appears to have fled as 100 police officers descended on the Bangkok temple early Thursday morning to arrest him and three other monks implicated in a temple-fund embezzlement scandal.

Reached by phone, Immigration Bureau commissioner Pol Lt-General Sutthipong Wongpin said there was no indication the abbot had left the country, but his office would place him on a blacklist if shown the arrest warrant.

He said that money had been frozen on the orders of the Anti-Money Laundering Office secretary-general.

Police had determined that the abbot was at the temple on Wednesday and officers were stationed at all entrances, Maitree said, but on Thursday they discovered another exit near the monks’ residences that afforded stealthy access to main road.

“I’m not worried about [the abbot’s disappearance],” he said. “No matter where he goes, we will find and arrest him eventually.”

Police also removed a computer and documents regarding the temple budget from Phra Phromsitti’s residence and arrested three of four civilians accused of aiding in the embezzlement.

Also arrested were two monks wanted in the case, whose names were not released.

The Wat Saket operation coincided with police raids at Wat Sam Phraya and Wat Samphanthawong in Bangkok and Wat Omnoi in Nakhon Pathom.

All of the senior monks are suspects in the embezzlement of state funds meant for dharma schools, an affair exposed last year with the discovery that senior officials of the National Buddhism Office (NBO) might have embezzled funds. 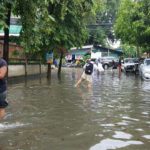