Security walls, concertina wire and security cameras will be installed by the government at Buddhist temples throughout the Deep South after two monks were killed in an attack.

Sunday’s decision to increase security at all temples came at an emergency meeting held two days after suspected armed separatists gunned down the pair at Wat Rattana Nuphab in the Su-ngai Padi district of Narathiwat province.

It was the first time since 2015 that a Buddhist monk was killed in the spasms of violence stretching back 15 years. Two other monks injured in the attack remained in stable condition Monday.

To help monks who might be unable to collect alms due to security conditions, the Office of Buddhism will give each monk a stipend of 2,500 baht, according to Suwaphan Tanyuvardhana of the prime minister’s office.

The military will be in charge of surveying temple security in the three-southernmost provinces of Pattani, Yala and Narathiwat.

The attacks were the latest in a heightened period of violence at a time the Thai government is trying to revive stalled peace talks .

Narong Song-arom, a spokesman with the national Buddhist authority, said local residents have been asked to work in tandem with the security forces to secure their community temples.

According to government, as of 2014 there were 207 Buddhist temples in the three Malay-Muslim majority provinces. Pattani has 80 temples, Yala 50 and Narathiwat 74. 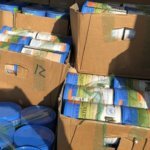