Shocking moment drinking game goes horribly wrong as a man drops DEAD after chugging a pint of beer at a work party.

A man has died following a drinking contest at a work party that went horribly wrong.

The worker collapsed to the floor after gulping down a pint of beer at Regent Cha-am Beach Resort in the Phetchaburi province, in Thailand on Saturday.

He had been competing in a company drinking contest before the freak accident.

Mobile footage captured the horrifying moment terrified co-workers could do nothing but watch on in horror, Coconuts Bangkok reported.

The workers are seen standing in a line and holding up a pint of beer in one hand.

The host walks up and down the line as he explains the rules and tells the workers to raise their glasses when they have finished drinking.

He counts down to zero before the competitors throw back the alcohol.

The man, dressed in shorts and an unbuttoned shirt, begins to gulp down his beer.

He brings his hand under his chin to stop any of the liquid from spilling and continues to chug the beer.

As he nears the bottom of the glass his drinking becomes slower. 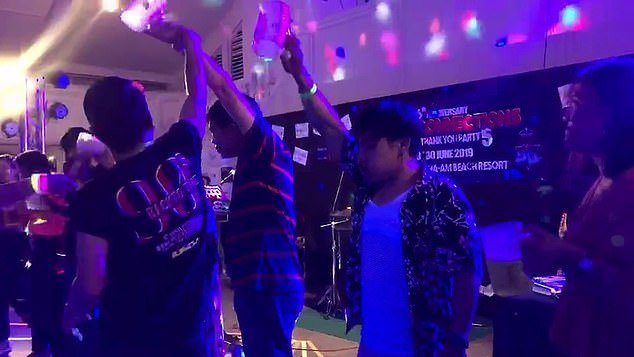 On his last mouthful, he struggles to swallow the beer as he raises his glass to the ceiling.

With great effort, he manages to gulp the liquid before stumbling on his feet and falling forward.

A witness took to Twitter to describe what happened next, in since-deleted posts.

‘Then he went into a seizure, and beer started coming out of his nose and mouth.’

Disease Control Department’s Somsak Laikabohk said it was too early to determine if the man died from alcohol poisoning.

‘Yes, he immediately died after drinking alcohol, but there are so many possible contributing factors that we cannot even say that alcohol caused it right now.

‘We have to see if the victim was allergic to anything, whether he had any underlying conditions or was drinking on an empty stomach and things like that.’

Mr Laikabohk said an autopsy would be carried out on the body as authorities worked to determine the cause of death. 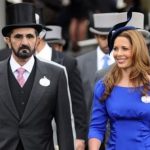 Dubai ruler’s wife in UK ‘in fear of her life’

Police crack down on vehicles polluting the air as part of slew...