Girls who appeared physically unhurt were told to stay quiet so they can find husbands.

Vietnamese women and girls who report cases of rape and sexual assault are often discriminated against by police, according to a new United Nations report.

Women who report rape in the country do not receive due trust and are often instructed to switch to informal negotiations with the perpetrators instead of pursuing trials, UN Women said at a press conference in Hanoi on Wednesday.

The study compared attrition in sexual violence reports in Thailand and Vietnam, and is the first comparative study of attrition – the process by which cases are dropped or lost by the criminal justice system – in Asia.

In both countries, attrition is high as women and girls who come to the legal system as rape victims often have to go through discriminatory patterns, and bias from police, prosecutors and judges.

Women in Vietnam are trapped by the mindsets that men are active agents in sexual relationships and women have to meet their demands, and by government campaigns which promote harmonious families which often reinforce stereotypes of them as mothers, wives and daughters-in-law, the report said.

Findings in Vietnam suggest that police, most of them male, often encourage the families of victims to negotiate rather than to proceed with criminal procedures.

One Vietnamese judge interviewed described a case he adjourned to allow informal mediation between the “two parties.”

Vietnamese police officers said they looked for victims being “forced,” “tied up,”, “beaten” and “torn clothing” to substantiate rape, and said that boyfriend-girlfriend rape was a rarity.

One police officer interviewed by UN Women said that he once looked into a case of a 17-year-old boy accused of raping his 12 year-old girlfriend. “They were in love, so I felt bad to have to proceed,” the male investigator said.

Many police officers interviewed said that in cases when a girl appeared physically unhurt, and her hyman was intact, they would tell the family that she was okay, and that it would be better to protect her honor by keeping silent so that she could find a husband when she grows up.

A 2010 national study on domestic violence against women in Vietnam found that 10 percent of married women experienced sexual violence from their husbands.

The women were three times more likely to have experienced violence from their partners rather than someone else, but 87 percent of abused women never sought help from any formal service or authority, the study found.

UN studies, as well as those by other non-governmental organizations such as the International Labor Organization, have suggested that sex workers frequently experience violence from their regular partners, clients, pimps and brothel owners.

But some Vietnamese police officers interviewed believed that rapes reported by sex workers were false and intended to extort money.

The research found criminal investigators tended to focus on the behavior of the victim rather than the accused.

One male investigator said that a sex worker once reported to him that she had been raped.

“I later observed that the guy was very tall; the girl was quite short. The girl said she was pushed against the wall and raped. I asked her how this could happen since the guy was much taller than her. She said she’d  lifted her legs. I asked that if she did so voluntarily, how could it be rape?” he said.

Many police officers interviewed also expressed suspicion about delayed reports, but one male investigator did show understanding, saying: “Victims often find these acts so horrible that they wash themselves immediately after it happens.”

The UN Women research was conducted in 2014, but its 2017 report also takes into consideration updates of sexual assault laws.

It was based on a review of around 120 police and/or court case files in both countries and interviews and focus group discussions with 213 key informants, including government officials, criminal justice system actors, civil society groups and individuals providing medical forensic and support services.

According to a WHO report from 2013, Southeast Asia is ranked highest after Africa, at 40.2 percent, for lifetime prevalence of intimate partner violence or non-partner sexual violence, or both, among all women of 15 years or older.

It is estimated that 150 million girls under 18 have experienced sexual violence. 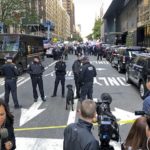 Are Liberals sending fake bombs to themselves ahead of mid-terms?