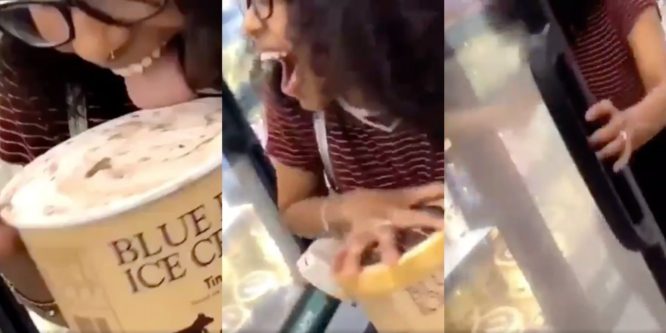 The woman who was filmed licking the top of an ice cream tub and then returning it to the freezer in a supermarket could be facing 20 years in prison, police say.

A video of the crime taking place went viral and has been viewed over 12 million times.

The incident is believed to have taken place in a branch of Walmart in Lufkin, Texas, which has led to the woman being dubbed the “Lufkin Licker.”

A police statement said: “Our detectives are working to confirm the identity of the female suspect seen in a viral video of her licking a half-gallon of Blue Bell ‘Tin Roof’ ice cream in a Lufkin Walmart store around 11 p.m., June 28.

“Once her identity is verified, detectives will proceed with getting a warrant for her arrest on a charge of second-degree felony tampering with a consumer product.”

The statement went on: “As that portion of the investigation continues, detectives are focusing on identifying the male

(in the green shirt) behind the camera seen in images of the two entering the store together.”

The second-degree felony charge of tampering with a consumer product would mean a two – 20-year prison term and up to $10,000 in fines, according to Texas state penal code.

According to a statement on Lufkin Police Department’s Facebook page — shared alongside a security image of the woman and her accomplice who filmed the video — Blue Bell says it has “retrieved what they believed to be the tainted container of ice cream.”

Lufkin Director of Public Safety Gerald Williamson said: “Our biggest concern is consumer safety — in that regard we are glad to see the tainted product off the shelves.”

However, the incident has led to calls for Blue Bell to introduce protective seals to all of their ice cream tubs.

Footage of the incident was shared on  Twitter  from an account under the handle @BlindDensetsu who captioned it:

“What kinda psychopathic behavior is this?!”

One user said: “I’m disgusted. This should be a criminal charge.”

‘TheArsenalMemz’ replied: “Disgusting. Should be arrested.”

The video has left some users scarred for buying products without safety seal.

‘Deshawn’ commented: “This is why I make sure the wrap is fully on before I purchase any ice cream from a store. No wrap no purchase. Period.”

Another one said: “Blue bell ice cream needs to start using tamper seals. I mean this girl is gross, but that’s pretty cheap for blue bell.” 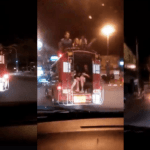 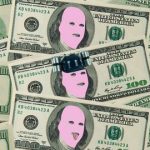