Police on Tuesday arrested a Saudi Arabian man who was drunk and acting aggressively at Suvarnabhumi airport.

Police say A Shmmary Mohammed N was waiting for a flight to depart Thailand when he began shouting and throwing things at other passengers.

A video clip posted to Youtube by Thai News showed Shmmary in custody but continuing to act aggressively.

Police said they would detain him until he sobered up.

It wasn’t clear if he had been charged with an offence. 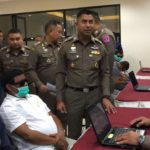