Police Officer Caught: In the current climate, security at concerts is tighter than ever. As such, it is no surprise to see a police presence at gigs. The force is tasked with ensuring events run smoothly by casting a watchful eye over the crowds.

However, one police officer at a gig in Houston, Texas, appears to have been casting a slightly too watchful eye.

The officer in question was on duty at a Drake concert at the Toyota Centre on 2 October when he was filmed by a member of the crowd appearing to take a picture of a woman’s bum.

Chalice Williams, who recorded the footage, said she was shocked to see the officer brazenly take the picture. Then, in a second clip, she claims the officer can be seen zooming in on the picture and admiring his handy work, while still stood around two metres behind the unsuspecting woman.

The video then appears to pan to the arse in question, at which point the grey-haired officer looks over his shoulder towards the camera, as though a sixth sense told him he was no longer the only person to have snapped the butt.

You can’t help but feel sorry for the owner of the booty, who seems oblivious to the pervy drama unfolding behind her as she just tries to enjoy a little Drake.

Houston Police Department (HPD) confirmed on Wednesday October 3 they had not received a complaint about the incident, which isn’t surprising considering the victim of the voyeurism had no idea it was going on.

However, that could all change with the emergence of this video, and the department said it had already launched an internal investigation.

A spokesman said: “We are aware of a video that shows actions of one of our officers at a concert last evening.

“Although HPD has not received a formal complaint, we have launched an internal investigation.”

It would be interesting to hear how PC Perv is going to try wriggle his way out of this one: “I was gathering evidence… I was zooming in on what I believed to be a suspect package… I’m still looking into it.”

Whatever the outcome of the investigation, may we suggest he is stood down from frisking duties. 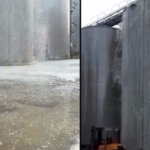 Video: 30,000 Litres Of Prosecco Becomes A Fountain After Tank Explosion