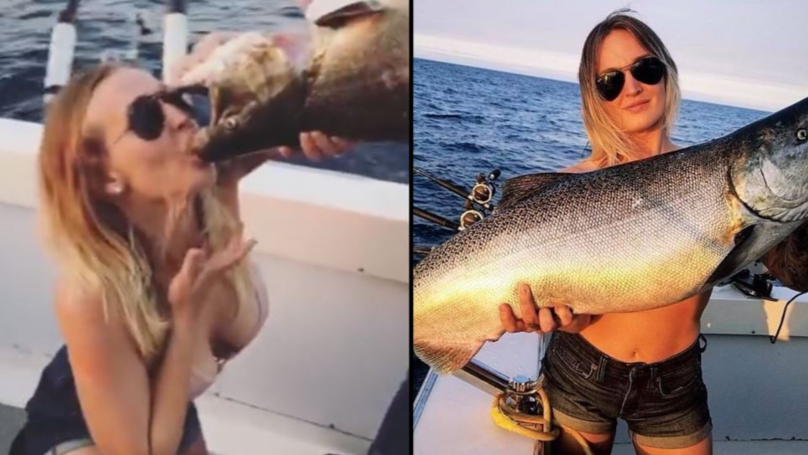 We’ve all found ourselves chugging beer from strange vessels at house parties – mugs, saucepans, vases, people’s belly buttons… But we’ve arguably never quite reached the desperation of drinking from the mouth of something that’s not only been plucked out of the sea, but is also dead.

That’s something one woman has done, having been filmed drinking a beer out of a dead fish’s mouth on board a boat as her pals cheer her on.

Aimee Lynn was on the deck of a boat off Port Washington, New York, when she knelt down to drink beer as it flowed from the mouth of dead fish and straight into hers.

In the footage, you can see the mother-of-one more or less manage to complete the fishy slammer, as two people tip it into her mouth.

“You know if you look at the video, he picked it up really high. The fish’s throat got caught in my throat so it was like I was choking it down,” she told CBS 58

“I was trying to breathe and not laugh at the same time so it was kind of awful to take in all the beer I guess.”

CBS 58 reports that Aimee also said she hopes to see more women do it in the future.

The video was posted to her Facebook page, captioned ‘#slamminsalmon‘, and has since racked up 3.6 million views.

From the many, many comments, you can see that social media users are divided on what they saw.

Some were a little grossed-out, or said it was ‘savage’, while one personjust tried to get their head around it, asking her why she did it and adding: “Did it make the beer taste fishy? Just curious.”

Aimee replied: “Because I wanted to and was told I wouldn’t do it.”

Ah, so the same reason any of us do all the daft things we do. Fair dos.

However, some were super impressed by Aimee’s beer-chugging skills, branding it ‘epic’, ‘awesome’ and ‘impressive’.

Someone else said: “This s going to become a thing ‘Slammin Salmon Challenge’.”

And someone even threw her a marriage proposal because of it.

Another defended Aimee, writing: “People need a life if they are hating on you, Aimee! You are having fun after an amazing catch. What is to hate? I admit. I didn’t know it was a beer you were chuggin. Yet feel much better now that I do know.”