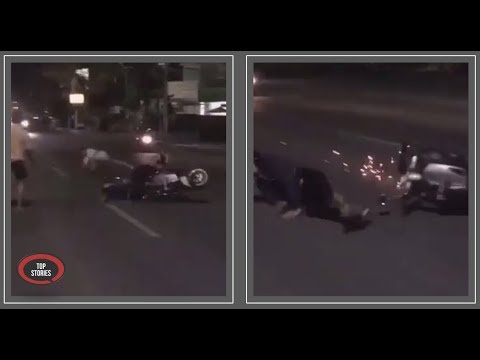 Moment a drunk Australian tourist jumps in front of moving traffic in Bali, before going on an alleged crime rampage across Kuta.

A brazen Australian tourist in Bali has been filmed jumping in front of busy traffic – injuring a motorcyclist – before going on an alleged rampage across the tourist hub of Kuta.

Video footage shows Nicholas Carr, 26, sprint towards a moving car, before hitting its windshield and rolling off the bonnet.

Two local men can then be seen chasing after a seemingly intoxicated Carr, who laughs as he runs away.

He was then seen running toward an oncoming motorbike and jumping up in front of it, sending the rider flying into the air before skidding along the busy road.

Carr can be heard yelling: ‘F**k this, f**k you!’ during his bizarre road stunt.

The force of the collision knocked the rider off and left the damaged bike sliding for meters.

The motorcyclist managed to walk away from the collision with only minor cuts and scratches but was left shocked by the sudden actions of Carr.

‘I got some injuries and couldn’t go to work today. And my motorbike got damaged. I hope he (Carr) could give compensation to fix my motorbike,’ he told 7 News

The incident happened on Sunset Road in the busy tourist hub of Kuta, on the island’s south.

Carr then allegedly went on a rampage, smashing a mini-mart window and a restaurant window and assaulting a Seminyak man who was asleep in his bed.

Nyoman Purda was woken up by Carr who was allegedly on the front step of his home.

CCTV footage from the man’s home shows Carr throw Mr Nyoman from his front porch into a wall.

‘I fell down. He went into my house and got into my bedroom. He locked himself in the room. Later on he went out through the back window,’ Mr Nyoman said.

‘I was really shocked. I don’t really understand what happened. It was so quick. I suffered a sprain. It looks like he was drunk.’ 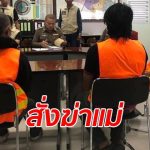 Thai woman arrested after ordering HIT ON HER OWN MOTHER