‘Think they can smell weed from our room. I’m low key stressing. Pray for ya boy right now,’ the video was captioned.

In the next video, he shakes his head at the camera while the caption reads ‘Okay I think I’m f**ked’.

Two Thai police can be seen searching through the rapper’s hotel room while speaking on walkie-talkies.

More than ten hours went by before Blake became active online again, this time to reveal he had been at the local police station.

(Scroll down for video)

A friend of hip hop artist filmed Blake and another male companion as they triumphantly walked out of the police station.

Blake and several other friends are then filmed embracing and celebrating his release.

‘That was a f**king close call bro,’ one of the men can be heard saying.

The young rapper then filmed the policeman sitting in his office through a window.

‘Hey there he is bro, that’s the c**t that locked him up,’ Blake’s friend can be overheard saying while tapping on the glass to get the officer’s attention.

Earlier in the day, Blake posted an Instagram story of his two friends smoking from bongs, with the caption ‘couples that smoke together stay together’.

Shortly after arriving back at his hotel, Blake again took to his Instagram stories to thank his followers for their support.

‘What a f**king experience. I just want to say thank you so much to my boys, so many people messaged me,’  he said.

‘That was a humbling experience, don’t f**k around in other countries. They full kicked our door in, it was f**ked up’.

He went on to say he can’t wait to get home and see his mother and his little brothers, and urged his followers to stay cautious when heading overseas. 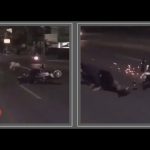