WHILE reconciliation has been a major item on the government’s agenda, a senior researcher for the New-York-based Human Rights Watch (HRW), Sunai Phasuk, complained there had been no justice eight years after the bloody crackdown on red shirts that left nearly a hundred people dead and thousands injured.

In the statement that he wrote and published on the HRW’s official website yesterday, on the eighth anniversary of the violence that erupted in 2010, Sunai slammed as outrageous that impunity for state-sponsored violence remained a standard operating policy of the Thai military.

“This simply encourages Thailand’s policymakers and soldiers to believe that they can get away with murder,” he said. “It also remains a major impediment to reconciliation between victims and supporters of the red shirts, a group that does not trust the Army and political establishment. Without justice, this is unlikely to change.”

Sunai’s statement commemorated victims of the crackdown on May 19, 2010, when at least 98 people were killed and some 2,000 injured after the government decided to use force against anti-government protesters who had been rallying for weeks. Among the victims were medic volunteers, media reporters and bystanders.

Although evidence showed the military was behind most of these abuses, no one has been held accountable so far. The red-shirt umbrella organisation, the United Front for Democracy against Dictatorship (UDD), has constantly lodged petitions with the National Anti-Corruption Commission to review the cases and hold officials involved in the killings accountable but so far without success.

The families and friends of the victims return every year to the Ratchaprasong intersection as well as to Wat Pathum Wanaram to hold activities in memory of their loved ones and call on the authorities to bring the culprits to justice.

The Ratchaprasong intersection sign on the footpath was enclosed with barricades, preventing the red shirts from using the area to hold their activities. Prominent pro-rights activist Sombat Boonngamanong had planned to hold a symbolic activity at a fast-food restaurant near the intersection but the restaurant was closed ahead of their meeting.

A religious ceremony held at Wat Pathum Wanaram, where a medic volunteer Kamolkate Akkahad was among others killed, saw dozens of attendees including Ivo Sieber, the ambassador of Switzerland to Thailand. The event was observed by scores of police officers.

Kamolkate’s mother, Phayaw Akkahad, who became an activist after her daughter was killed, with others also performed a short play at the temple, demonstrating the lack of justice in the massacre case. She wore an apron similar to the one Kamolkate had worn when she was killed.

Phayaw, along with Pansak Srithep, the father of Samaphan Srithep who was also killed in the crackdown, and another activist eventually managed to march to the Ratchaprasong intersection and stood for a brief moment in silence to commemorate the victims of the crackdown. The activity was watched closely by police officers.

In a related development, UDD leader Nuttawut Saikuar yesterday attended a religious ceremony held for the victims of the crackdown at another temple in Bangkok’s Bangkhen district and said the UDD would continue to fight for justice for those killed.

Is that Jet Li? 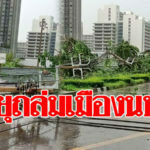