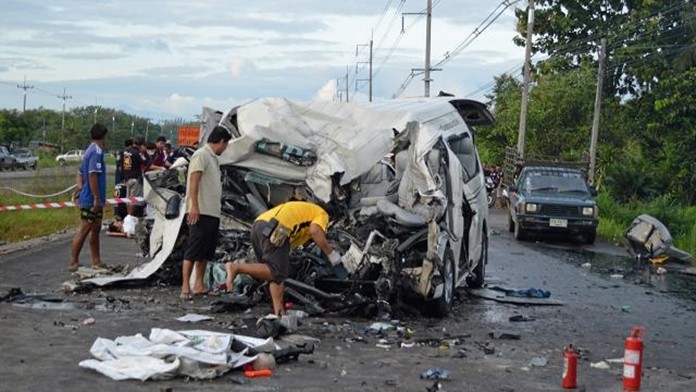 A van carrying Lao migrant workers on their way to a Thailand-Cambodia border pass, yesterday rammed into an 18-wheel trailer truck, killing 11 people and seriously injuring four others on a four-lane Sa Kaeo – Chanthaburi road under construction.

Sa Kaeo Provincial Governor, Wichit Chartphisit visited the three injured Lao workers at Phra Yupharat Sa Kaeo Hospital and said the road accident was a shock. The hospital will treat the Lao patients to the best of its ability as iy does Thai patients. Authorities will maintain the bodies of all 11 deceased persons which are to be passed to their relatives. The other person injured, the Thai truck driver, is being treated at Wang Nam Yen Hospital.

Transport Minister Saksayam Chidchob, said today the accident was reportedly caused by the van driver falling asleep behind the wheel though he was not speeding beyond legal limits. However, the case is yet to be thoroughly investigated by the Department of Land Transport.

The accident occurred in the wee hours of Sunday on Highway 317 outside the Provincial Electricity Authority branch in Wang Somboon district of Sa Kaeo province. The spot was on the road being expanded from two lanes to four lanes.

In the accident, the van with license plate No. 34-0405 Bangkok, crashed into the trailer truck with license plate No. 70-1234 Uttaradit, instantly killed 11 people – five males and six females and injuring another four people. All the deceased persons were traveling in the van. The van was owned by a private firm which brought migrant workers to a border checkpoint for passport extensions at Baan Laem permanent border pass in Chanthaburi. The van which had come from Bangkok suddenly swerved as it reached the spot and rammed into the 18-wheel truck, killing and injuring the passengers. 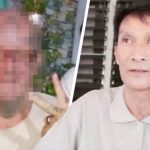