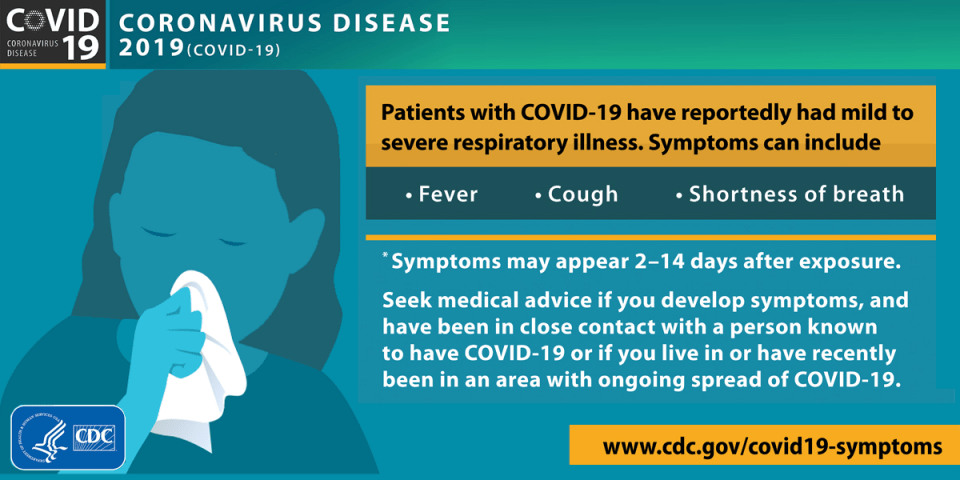 The United States Centers for Disease Control and Prevention has added six symptoms of the novel coronavirus to its list, suggesting health experts are learning more about the growing number of ways physicians see the virus affecting patients.

The symptoms, which the CDC reports could appear two to 14 days after exposure to the virus, are:

Mario Ramirez, the former acting director of the office of pandemic and emerging threats under President Barack Obama, told the Washington Post the frequency of symptoms in new diseases changes with time, even with recurring illnesses like season influenza.

The recent additions, he said, reflect the CDC’s confidence in stating: “We can say reliably that these six symptoms go with Covid-19.”

Ramirez, who is also an emergency room physician, said that confidence stems in part from the growing number of patients being treated for Covid-19 in the United States.

Local trends in symptoms, in conjunction with data from other countries, allow the CDC to present information that captures the right segment of the population for testing, he added.

“You don’t want to list twenty-something symptoms, especially if half the population has those symptoms,” Ramirez said.

“You’re trying to balance targeting the right people to come in for testing, so it must be specific.”

The additions confirm what patients and doctors have been reporting anecdotally for weeks.

In particular, the loss of taste or smell has been known to appear in patients since at least mid-March when a British group of ear, nose and throat doctors published a statement amid growing concern that it could be an early sign someone is infected but otherwise asymptomatic.

A study of European Covid-19 patients found between 85.6 per cent and 88 per cent of patients “reported olfactory and gustatory dysfunctions, respectively.”

In an Iranian study, 76 per cent of Covid-19 patients who reported a loss of smell said it had a sudden onset. In many of the cases, anosmia, as it’s called, appeared before other symptoms.

“It scared the hell out of me,” said Vallery Lomas, a 34-year-old champion baker, who feared she would never get her senses of smell and taste back.

“I could smell nothing for probably five days.”

Lomas was presumed positive for Covid-19 in the midst of writing a cookbook. Smell and taste are intertwined, so some people who think they have lost both senses may have lost only their sense of smell.

“What happens with loss of the sense of smell is you lose flavour,” but not taste, said Jo Shapiro, a professor of otolaryngology at Harvard Medical School.

Though not listed on the CDC website, fatigue also has been reported in people who have either tested positive or told to assume they have Covid-19 when testing was not available.

Hedy Bauman told NBC News the fatigue hit her like a truck. Even reading was exhausting, she said.

“My bathroom is maybe 15 steps from my bed,” Bauman told NBC News. “I wasn’t sure I could get from the bathroom to my bed.”

Bauman told NBC she had chills but no fever.

Early reports of the virus suggested it caused standard respiratory symptoms, though it is extremely contagious and deadly. During the past few weeks, health experts have noted how Covid-19 attacks many organs in the body.

In some patients, physicians are reporting a blood-clotting complication that does not respond to anticoagulants. Some patients’ lungs fill with hundreds of microclots, autopsies have shown, and larger clots can break off and travel to the brain or heart, causing a stroke or heart attack.

Evidence from the more than 80,000 coronavirus cases reported in China indicates symptoms in about 80 per cent of patients are mild.

The additional symptoms will make it easier for people to know when to ask for a test, Ramirez said, and it could help physicians determine when patients need to be tested or at least be told to assume they have it and self-isolate.

“Anecdotally, we’ve heard about the symptoms – and most physicians were already including it in their decision-making process,” Ramirez said.

“But to the extent the U.S. population reads CDC guidelines, this is a much more public-facing document.”

The CDC continues to recommend managing symptoms at home unless they include trouble breathing, persistent pain or pressure on the chest, new confusion or inability to arouse, or bluish lips or face. 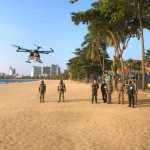 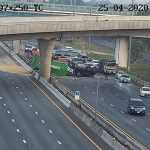 Lorry topples off a bridge, killing the driver but miraculously avoiding cars as it crashes down below after taking a bend too quickly in Thailand