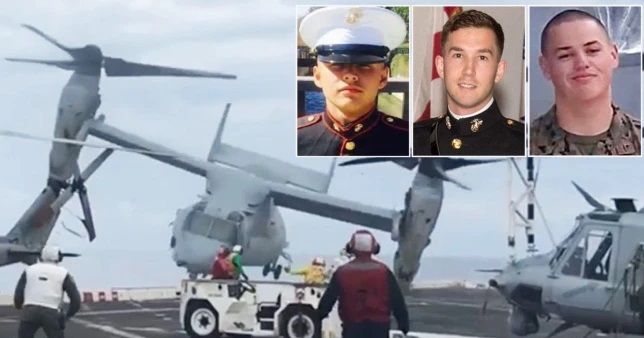 Dramatic footage has emerged of a deadly US military accident in which a state-of-the-art hybrid aicraft crashed into the side of a warship five years ago.

Three marines died and 23 narrowly escaped drowning when the MV-22 Osprey veered into the US Green Bay while trying to land on its deck off the coast of Australia in August 2017.

The clip, which surfaced on Saturday, shows the aircraft hovering toward the deck before suddenly veering to one side and hitting the ship.

Air traffic controllers are seen sprinting away as a spinning rotorblade careers towards them before the person fiming them ducks for cover.

Officials say the collision crushed the cockpit, breaking the pilot’s hip and leg and piercing the hull, causing it to sink after it fell 30 feet into the water.

Rescuers fished out most of the 26 servicemen onboard for military exercises after they escaped the sinking wreck, including the pilot.

But his co-pilot, First Lieutenant Benjamin Cross, 26, and two others, Corporal Nathaniel Ordway, 21, and Private Ruben Velasco, 19, could not be found after a 12-hour search.

A Pentagon investigation found no individual personnel were at fault for the incident, although it said the Osprey was likely carrying too much weight.

The aircraft first got into difficulty when it failed to connect to the warship’s automatic ‘Tactical Air Navigation’ signal, forcing the pilot, who survived, to rely on guidance from the air traffic controllers on deck.

The pilot followed ‘correct procedures’ for landing until the Osprey suddenly started falling at between 200 and 300 feet per minute, after which he and his co-pilot made a number of failed attempts to correct their course.

One of these caused the aircraft to strike the flight deck, after which it moved ‘forward along the starboard side of the flight deck until the plane hit a steel stairway’.

The report continued: ‘The left proprotor blades damaged the flight deck and a nearby helicopter, and the impact of the collision crushed the cockpit, breaking the hip and leg of the pilot inside.

‘The aircraft then fell 30 feet into the water, and with a hole in the cockpit, the aircraft filled with water rapidly and sank nose-first.’

Excess weight likely meant the Osprey did not have enough forward thrust to hold a hover against the opposing force caused by its rotorblades, officials said.

Stricter rules have been put in place around how much weight they can carry.

Four crew died afterr their aircraft went down during a military exercise in Norway in March this year, while five more died in a crash in the Californian desert in June.

These incidents mean the aircraft has been involved in a total of nine crashes and other incidents resulting in 21 deaths since coming into active service since 2017.

During the 15 years of testing prior to its launch there were a further four crashes resulting in 30 fatailities.

Its design is prized for combining the take-off agility of conventional helicopters with the long-range flight capabilities of propeller planes but is more difficult to fly.

The publicity around fatal incidents and the high difficulty of operating the Osprey have earned it a reputation for being dangerous.

However the US military has continued to keep it in service, insisting that its safety record is superior to comparable alternatives.

A 2012 review found the Osprey experienced on average 1.12 serious incidents per 100,000 flight hours, slightly lower than the 1.14 scored by the Sea Knight helicopters which it has been replacing. 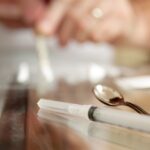 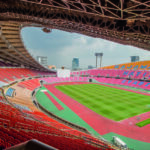 Manchester United and Liverpool next week