Two furious women stormed onto a bus and attacked the driver after their vehicles almost collided.

The woman driver and her sister were travelling along Pasay City, the Philippines, on April 5 when they had the near miss with the bus.

They stopped their car and both boarded the bus in a fit of road rage yelling at the driver that he ‘’could have killed them’’.

Footage shows the woman throw several punches at the driver who desperate tries to block them.

“We have a baby with us! You almost hit our car,” says the woman.

The bus driver said that he was on the right lane and was about to unload passengers when the car suddenly cut in front of him.

“They don’t know how to drive,” he said.

Not long after, the other woman tries to hit the bus driver landing a few punches in his face.

A traffic enforcer meddled with the situation and logged a report. The bus driver and the women decided to settle the situation, agreeing to let go of the traffic violation and the physical injury.

Passenger Angelyn Saavedra recalled the incident. She said: “The bus was about to approach the unloading bay when a white car dashed in front of us from behind and stopped.

‘’I don’t think the bus driver did anything wrong.’’ 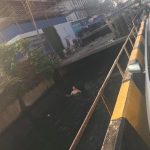