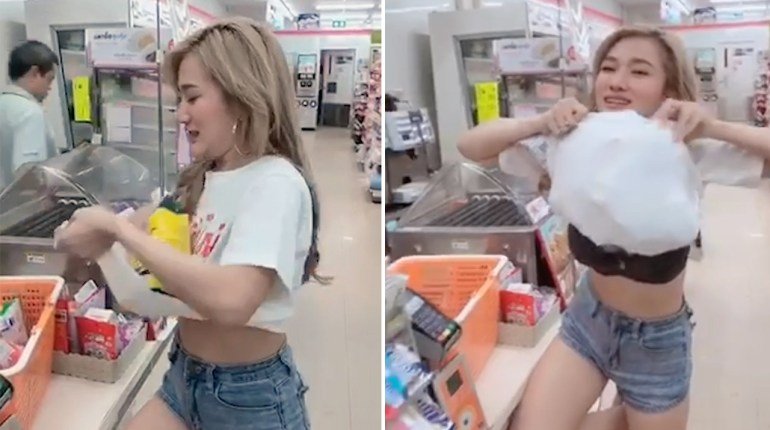 This is the amusing moment a shopper gets round a ban on plastic bags – by using her top to carry her groceries.

But with a basket full of snacks, the only way for Rewadee to leave with her goods was with her own unique solution.

Footage shows the young woman hitching up her top – revealing her black bra – to form a make-shift bag to carry her goods.

She’s heard laughing in the video while saying ”it’s full”.

Speaking today (Jan 7) Rewadee said: “We bought some snacks that night, but we did’n’t have a bag. I then decided to use my shirt I was wearing instead. I helped save the planet by stopping using plastic, so it feels good.”

Dozens of shopping malls and chain stores – including 7-Eleven – ditched the environmentally damaging bags on Wednesday (01/01).

The move is ahead of a planned nationwide government ban in 2021 on single-use plastics such as bags, cups, straws and Styrofoam containers.

Officials said that the country’s most well-known retailers banning plastic bagswas an ‘’important measure’’ that will ‘’really make a difference’’.

Warawut Silpa-archa, a cabinet member and minister of natural resources, said: ‘’We know it’ll be a little inconvenient for customers at first but I believe it is an important measure to work towards our goal and to really make a difference.

‘’The participating stores are all Thailand’s biggest names including 7-Eleven, Central, HomePro, Big C and more.’’

The country will ban single use plastic in 2021 following increasing numbers of cases of animals being harmed by plastic pollution.

Speaking this week, Warawut said Thailand was ranked sixth among the world’s top countries that dumps waste into the sea.

He added: “During the past five months, we were down to 10th, thanks to the cooperation of the Thai people.” 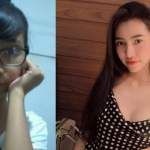 Update: Woman, 22, says her family no longer recognised her after cosmetic surgery transformation 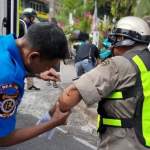 Brave volunteer jumps in front of motorbike to save 4 lives