A missing German tourist was found dead with his head bound in a plastic bag with duct tape in a suspected sex game gone wrong in Thailand.

Christopher Faust, 39, failed to turn up at work in Hannover, Germany, on May 16, sparking concern among his friends and relatives who called police and began searching for him.

Despite appeals for him to get in touch, the DJ had taken a secret holiday to Thailand and checked into a luxury villa in Krabi in the south of the country on June 7.

He was last seen alive in the morning on June 9 ordering breakfast to be sent to his room, which was the same day that housekeepers saw a “chubby Thai woman” leaving.

Hotel staff were horrified when they checked the property yesterday morning and found his naked body on the bed.

Christopher had a green plastic bag wrapped around his head which strapped in place with duct tape.

Officers are now investigating the bizarre death after hotel staff reportedly said that they had seen a “chubby Thai woman with pale skin” leaving his room on June 9, which was also the last day Christopher was seen alive.

They believe that the mystery local woman is likely to have been a sex worker but police do not know whether she was with Christopher before or after he was last seen.

Lieutenant Colonel Chavalit Petchsripia, Director of Ao Nang district Police Station in Krabi province, said they had initially written off the death as suicide but would now investigate further.

The police chief said: “The initial theory was that Mr Christopher Faust had committed suicide.

“However, the investigation team is now tracking images from the CCTV in the hotel again. The body is also being sent to the forensic institute to prove the cause of death. Police are also coordinating with relatives and informing the embassy.”

Police said that in the room there were two half-full glasses of water on a table.

There was also a receipt for a roll of red duct tape, which was strapped round Christopher’s head without being cut and still attached the body of the roll.

Christopher’s valuable belongings, including his laptop, passport, credit cards and wallet, had not been stolen and there was no sign of a violent struggle or robbery.

Lieutenant Colonel Petchsripia added: “There is a suspicion that the death could be related to an autoerotic game and it was an accident. There was sperm on the dead man’s body.

“One witness also reported that they had seen a chubby woman leave the room on June. We need to check if that was involved.”

Police in Hannover made an appeal to find Christopher on May 23.

They said they had searched hospitals in the area and contacted the missing man urging him to contact friends or relatives.

They said ambulance crews had approached one man who matched Christopher’s description which “we assume the man was the missing 39-year-old” but he had “disappeared before the police arrived”.

spokesman for Hannover Police said in the appeal that they believed Christopher had “shaved his head and beard”which matched the image of the Christoper when he had his picture taken at Thai immigration. 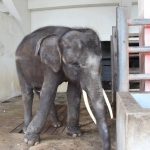 VIDEO: Investigation Reveals Torture Of Elephants And Primates In Thailand