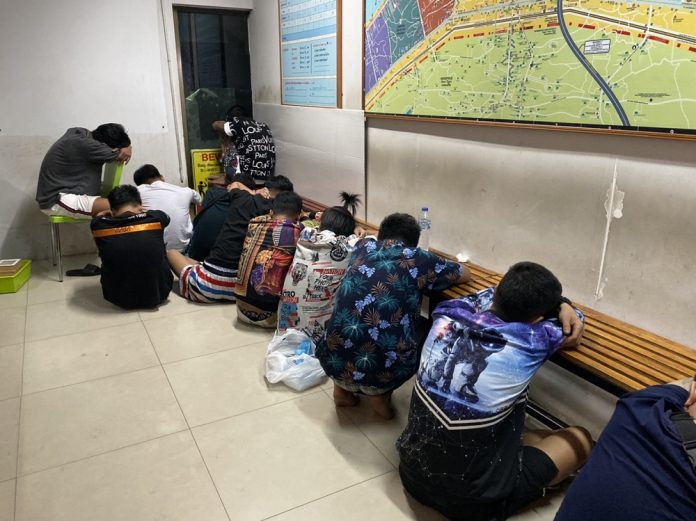 Police said Friday a group of 20 young men and women were arrested after beating up four jet ski rental operators on the popular island of Koh Lan yesterday.

Maj. Chainarong Chai-in of Pattaya Police Station said one of the vendors attacked by the suspects suffered serious injuries while the other three suffered minor wounds. Six male assailants were later charged with physical assault on Friday afternoon, after one of the victims gave his testimony to the police.

The jet ski owner, Jirakrit Chamroenchit, said the group agreed to hire four jet skis from his son while they were sightseeing on Koh Lan on Thursday. But as the payment was still being arranged, some of the men reportedly started posing for photos with the jet skis and tried to ride the vehicles away, according to Jirakit.

Jirakrit said his son rebuked the group and told them to leave the jet skis, prompting them to beat him, who then phoned Jirakrit for help. Jirakrit said he later arrived at the scene with two other men, and they were also attacked by the suspects with wooden sticks and rocks.

Jirakrit said he called police for help after one of his companions were beaten by the youths until he lost consciousness.

Police said 12 men and 8 women in the group were present during the assault, but officers believe six of them were responsible for the attacks.

Although police initially said 19 of the suspects tested positive for drug use, lab results from a hospital showed traces of narcotics in only two of the men, according to the police. The pair was detained along with the men wanted for assaults, while the rest were released without any charges.

NB: Tourists have long been advised to take photographs of jet-skis before use to prevent owner SCAMMERS and their thugs charging users for damage that is already present.

Thailand blame Euro 2020 for this year’s tourism failures, in advance