A Bangkok Poll found that 57 per cent of respondents to its survey identified free medical coverage or universal healthcare as the policy of greatest interest to them, followed by farm aid (54.4 per cent); those involving welfare, cost of living and income (48.3 per cent); assistance for the underprivileged and the poor

When asked what qualities they would want in their prime minister, 66.4 per cent said they wanted a leader with integrity and no corruption record, followed by a resolute leader (46.6 per cent), a leader with proven creativity or with ideas for new projects (45.9 per cent), and a diligent person who works for the people (45.2 per cent).

Asked whether they thought Prime Minister Prayut Chan-o-cha would gain popularity by visiting people in the provinces on the pretext of mobile Cabinet meetings, 56.5 per cent believed he would become more popular while 43.5 per cent said he would gain only a little.

The survey, titled “What Kind of Prime Minister Thais Want”, was conducted on May 16 and 17 based on telephone interviews with 1,205 people aged 18 or over 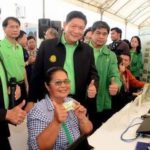 CBBC cleans up the anniversary honours