An unidentified motorcyclist was killed by a freight train in Muang Nakhon Ratchasima late Wednesday night after ignoring the level crossing barrier.

Police said the accident occurred at 11.09pm at the Ban Mai crossing in Tambon Nai Muang.

The motorcyclist, who appeared to be around 30 or 35 years old, was killed instantly when the train, unable to stop or slow down, struck his bike.

Police determined that the motorcyclist sped through a gap in the retractable road barrier to try and beat the oncoming train.

Is Chitpas poor enough to qualify for bail assistance? 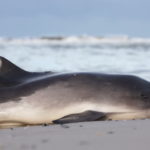 Second dead dolphin in a week found on Samui beach