He said the southwest monsoon had arrived, bringing humidity and no doubt plenty of precipitation to much of Thailand.

Wanchai said a low-pressure trough would cover major portions of the country until October and the amount of rain would be similar to that of last year.

But he forecast less rain in June and July than normal in the drier Northeast. 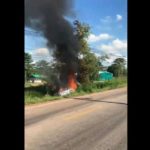