A teacher died of an apparent heart attack inside the school’s teachers room on Monday afternoon.

Police said Surasak Phankham, 42, a teacher at Prachak Silapakhan School in Muang Udon Thani, died while taking an afternoon nap in the office after overseeing Boy Scout training for students in the morning.

The Muang Udon Thani police station was alerted to his death at 5.30pm and police rushed to the scene with a doctor from the provincial hospital.

A teacher colleague, Sakko Gongsui, 37, told police that Surasak took a nap on a mat on the floor of the office after lunch. Sakko said the school was closed for the mid-year vacation but Surasak had come to help train Boy Scouts.

Sakko said while he was sitting at his desk, he saw Surasak having convulsions. He checked and found that Surasak had died and so called police. 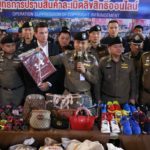