U-Tapao International Airport has become well-known as a passenger airport in the last few years. But did you know that this is only a small part of a large Thai military base called the U-Tapao Royal Thai Navy Airfield? And that during the Vietnam War, the U.S. had between 6,000 and 8,000 military personnel stationed at U-Tapao?

At the January 26 meeting of the Pattaya City Expats Club, Pat Koester, PCEC’s Past Board Chairman, shared some of her experiences, including many slides and videos that she took with her Super-8 camera, while she was Director of the U-Tapao USO Club from 1970 to 1974.

Pat explained that the USO (United Service Organizations) was formed just prior to the onset of America’s involvement in World War II in 1941 to lift the morale of the US military and nourish support on the home front by bringing together several organizations under one umbrella. The USO is a non-profit, charitable corporation chartered by the U.S. Congress.

Pat explained that during the Vietnam War, US troops were stationed at several Thai military bases, and that each of those bases had a USO Club. She shared many slides to show some of the activities offered by the U-Tapao USO Club, which was open 24 hours a day and had a Thai staff of close to 100 people. The activities ranged from playing cards or pool or ping pong, to just resting the in club’s comfortable chairs, perhaps reading a book or even taking a nap. She also noted that the club’s Snack Bar had the best hamburgers, French fries, and milk shake on the base. She said that during the holiday season, the toughest time for troops overseas, the USO’s Christmas decorations included a large cut-out Santa and his sleigh being pulled by water buffalo. At midnight, the USO Directors took donuts and coffee to the many security personnel on duty around the perimeter of the base. Bob Hope also brought his show to U-Tapao while Pat was there.

While all the other bases in Thailand had fighter jets, U-Tapao was the only one that hosted a Division of the Strategic Air Command (SAC) flying B-52 bombers and KC-135 tankers. Pat’s videos included the take-off of a B-52 bomber, which she took while standing on the runway as it took off directly overhead. “I often wonder if that crew saw me and wondered who that crazy woman was standing on the runway with her little Super-8 movie camera,” she said.

Another video showed the unique take-off and landing of the U-2 spy plane. A third was taken at one of the other Thailand bases that had fighter jets. This video showed the landing and ensuing wet-down celebration of an F-105 Thunderchief pilot who had just survived his 100th mission which included his friends and Pat also getting wet.

Pat shared a poignant experience that occurred on December 18, 1972. She and several others were having dinner at the Officer’s Club when a B-52 crew walked by in their flight suits. One of them stopped at their table and said, ‘I think we’re going Downtown tonight. Would you like to come along?’ Everyone knew that ‘Downtown’ meant Hanoi. That was the beginning of an operation called Linebacker II, the bombing of Hanoi that finally brought the North Vietnamese to the negotiating table.”

Pat said the “powers that be” had required the B-52s to fly the same route at the same time every night. Further, “After a while they became sitting ducks for North Vietnamese anti-aircraft guns.” She said that during the 11-nights of that operation, in the morning she would walk down the rows of trailers where the crews lived and “if they had two wood boards nailed over the door in an “X”, it meant that crew had been shot down.”

“Some people might think that because I enjoyed working with the military for four years, I must be a war-monger,” but Pat also said “far from it” and then explained that before working for the USO, she had been a Peace Corps Volunteer in Thailand. “The Peace Corps has three main goals to help: the host country develop their manpower, the people of the host country understand Americans, and Americans understand the people of the host country.” She mentioned that during her USO years she felt she was “able to fulfil those second and third goals even more than she did while in the Peace Corps.” This, she explained, was because most of the guys were 18-and19-year-olds who had never been far from home, and were in Thailand not by choice, but because they joined the US Air Force to avoid being drafted into the US Army. She said many of them were angry and confused at having been yanked out of their comfortable homes and shipped to a country on the other side of the world, where nobody understood them, and they didn’t understand anybody. “And they sure as heck didn’t want to be involved in a war that nobody understood.” Some of them took out their frustration on the Thai people, saying they hated Thailand and the Thai people. “But they didn’t really hate the Thai people,” Pat said, and she was able to help them understand Thai culture. “I can’t tell you how many guys came into my office and said, ‘Pat, I’m leaving for home in a few days, and just wanted to tell you how much I appreciate what you and the USO did for me,’”

After the presentation, the MC brought everyone up to date on the upcoming club events and others of interest. This was followed by the Open Forum where questions are asked and answered about Expat living in Thailand, especially Pattaya.

For more information about the PCEC, visit their website at: www.pcec.club. 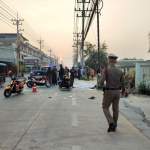 One dead and three injured in multi vehicle accident in Banglamung 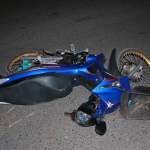