Thailand’s Criminal Court sentenced a Facebook page administrator to two years in prison today (Friday), after finding him guilty of committing an act of lèse majesté, an offence in the Kingdom, by pasting a sticker on the portrait of His Majesty the King in front of the Supreme Court on the night of September 19th, 2020.

The court ruled that the pasting of the sticker, bearing the logo of the political satire page named “GuKult”, on the King’s portrait by the website’s administrator, Narin Kulpongsathron, may subject the monarchy to contempt or hatred with an intention to destroy the institution.

After the conviction, the defendant was released on 100,000 baht bail.

According to Thailand’s lèse majesté law (Penal Code Section 112), whoever defames, insults or threatens the King, the Queen, the Heir-apparent or the Regent is liable to imprisonment from three to 15 years per offence, if convicted.

Human rights organisations and civic groups are becoming profoundly alarmed about the increase in the use of this increasingly controversial law, by the government of Prime Minister Prayut Chan-o-cha, to silence critics of the monarchy, especially those in the movement calling for monarchy reform that emerged in August 2020.

From November 2020 to February 2022, up to 173 individuals were charged with the offence, according to the Thai Lawyers for Human Rights (TLHR).

Stalker hid in woman’s attic and came out at night 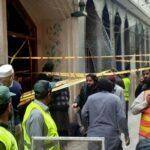