Two men have confessed to laying and detonating bombs around Bangkok in revenge for military operations in the Deep South, a police source told the media Saturday.

According to a report on Channel 3 which was later disputed by the prime minister himself, Wildun Maha and Luai Sae-ngae – both natives of Narathiwat province – have confessed to the crimes of laying bombs and arson devices across Bangkok, most of which were detonated on Friday.

The unnamed police source said the pair intended the bombing spree to be in retaliation for the death of a friend who died while under military custody in the southern region.

The report said the two men were arrested Thursday night en route to Chumphon. Police had been on their tail for throwing suspected explosive devices at the Royal Thai Police headquarters earlier that day.

Narathiwat and two other southern border provinces are home to a separatist movement believed to be responsible for numerous attacks on military and civilian targets over the past 15 years.

But a spokeswoman for Prime Minister Prayuth Chan-ocha said the claim is false. Naruemol Pinyosinwan said police have yet to attribute any motive to the attacks.

A relative of one of the two men also told Post Today that they believe the pair might have confessed while under duress.

The unnamed relative identified one of the two men as a Muslim cleric who has no prior history of violence and added that their families have been unable to contact them since they were taken into custody.

The national police have identified neither the perpetrators nor their allegiance. Southern militants have been suspected of bringing their secessionist campaign north in the past, such as in the 2016 Mother’s Day bombing spree that killed four people.

According to the latest police report, a total of ten devices exploded at five areas around Bangkok on Friday, while one device was defused on Thursday. What was previously suspected as arson at one location actually involved firebombs?

The devices that went off:

A firebomb at a Miniso store inside Siam Square One around 4 am
Four bombs at the Government Complex in Chaeng Wattana, where the Thai Armed Force headquarters and the Administrative Court are located
Three firebombs at markets on Soi Petchaburi 9
Two bombs at BTS Chong Nonsi and in front of King Power MahaNakhon building
One bomb at the Office of the Permanent Secretary of Defense on Sri Saman Road
A suspicious object found in front of the Royal Thai Police Headquarters on Thursday also turned out to be a real bomb, which was defused. Earlier reports mistook the bomb for a false alarm.

Police have ruled another explosion at Soi Rama IX 57/1 as unrelated to the larger plot targeting key places around the city. Police said three teens, two of them minors, were charged for planting a ping-pong bomb in an incident involving a local gang feud. The bomb later exploded and injured three street cleaners. 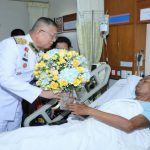 Their Majesties offer moral support to victims of Bangkok blasts 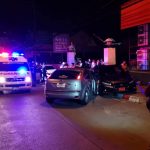 Man seriously injured as drunk driver loses control of his vehicle, crashes into multiple other cars in Pattaya